The Suffering Created By Eve And Pandora 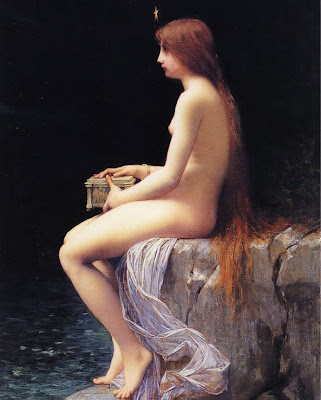 It's always puzzled me as to why Eve munching on an apple has caused all of us so much suffering. Well, that's what the Bible seems to indicate. It seems a little unfair - to say the least.

But, though many creationists will disagree, Adam and Eve is simply a story or myth. The original meaning of which has no doubt been lost in translation.

But it's interesting that in Greek Mythology they have their own version of Eve - Pandora. It appears she has also caused us a lot of suffering and diseases.

Let's look at Pandora. She was made of clay by Hephaestus at Zeus's request. She was then given life and all of the gods made and gave her presents. This is where her name originates: pan "all" and dora "gifts". She supposedly received every necessary gift a mortal could desire.

From here on the story varies. One version is that she married Epimethius - he was the brother of Prometheus who stole fire from heaven. Anyway, Pandora's husband must have been chuffed at all of her presents, including the one she was told not to open - this was, what is now often called, Pandora's Box.

Epimethius opened the box and sent a multitude of evils and diseases forth into the world which still afflict mankind today. All that somehow remained imprisoned in the box was Hope.

So it is Hope alone who now comforts man in his troubles and misfortunes.

Other more popular versions say that it was Pandora who opened the box out of curiosity, which ties in more with the Eve story. Some write that it was actually a jar and not a box but, whatever, nastiness was released and Hope remained trapped inside. Hesiod in his poem, Works and Days, wrote:

"Only Hope was left within her unbreakable house,
she remained under the lip of the jar,
and did not fly away.
Before she could,
Pandora replaced the lid of the jar."
There are several similarities between Eve, of Adam and Eve fame, and Pandora.

(a) The stories seem to try to answer the question as to why there is so much evil and suffering in the world - which God or the gods seem to ignore.

(b) They were both the first divine creation of a woman.

(d) By this first woman disobeying God's order or commandment all of mankind has experienced much suffering and ills.

So there we go. Who came first, Pandora or Eve?

As Gods, therefore, we must have great potential. Though the Bible is always a bit confusing. Before Eve was created it says: So God created man in his own image, in the image of God created he him; male and female he created them." Genesis 1:27. (Or maybe this refers to Yin and Yang within us.)

Stranger still, there's a hint, prior to this, that there is more than one God: "And God said, Let us make man in our image, after our likeness ..." Genesis 1:26.

Perhaps one day everything will become clearer.

Further Reading:
Kundalini The Serpent Of Adam And Eve
Bible Coincidences Where God Is At The Centre
How A Prayer Was Answered