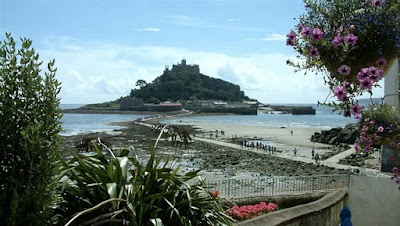 Last week, where I live in Cornwall, we had a tsunami that made people's hair stand on end. Not a joke, it really happened. Luckily there weren't any injuries or damage caused other than perhaps a few split ends.

By comparison to other well known tsunamis it was very small but it has puzzled experts as to the cause.

The wave wasn't too high but it was big enough to suck the sea out for over 150 feet, before surging back to the shore. It gave many tourists a good soaking as they walked over the causeway to St Michael's Mount from the mainland.

The wave rolled up estuaries as far as Plymouth turning over moored small boats.

The air at St Michael's Mount was charged with a surge of some sort of static electricity. The guide on the Mount told of how, "People's hair stood on end."

Other people reported how the air was warm and had an unnatural stillness prior to the wave hitting the Mount.

The question raised by the local media is: Why did this happen?"

There are several theories. The most common is that there was an undersea landslide out at sea, perhaps 200 or 300 miles away.

Okay, perhaps, but why did people's hair stand on end?

The experts don't really know but it's possible that it was the Piezoelectric Effect. The ancient rocks around Cornwall, which contain quartz, could generate high voltage electricity if squeezed together by some sort of landslide out at sea.

But there again it could have been the Lithosphere-Atmosphere-Ionosphere Coupling Mechanism. I hadn't heard of this either!

Michael Hanlon of the Daily Mail explains, "The theory is that in the days before an earthquake, the great stresses that have been built up cause a release of large amounts of radioactive radon gas from deep in the earth. The radioactivity from this gas ionises the air on a large scale, electrifying it and heating it up."

Maybe this is what happened in Cornwall. We have lots of radon in local rocks.

Dr Simon Boxall, an oceanographer reckons it was a seiche. Right doc, but what is a seiche? He explains: "This is a freak wave which can be caused by an area of very high or low pressure crossing an area of water."

He added, "The static had nothing to do with the wave, but it did have a lot to do with a low pressure weather system."

All seems feasible but, if you prefer conspiracy theories - which are always a lot more interesting - it was caused by the Pentagon!

It is rumoured that recent worldwide earthquakes are being brought about by secret radio experiments - allegedly being carried out by the Pentagon. So, wonder what they've got against us in Cornwall?!

Whatever the cause of Cornwall's hair raising tsunami it's created a lot of discussion in the local media.

Just found out on Wikipedia that Cornwall also had a tsunami back in 1755, this was caused by an earthquake in Portugal. To quote: "At St Michael's Mount, the sea rose suddenly and then retired; ten minutes later, it rose 6 feet (1.8 m) very rapidly, then ebbed equally rapidly."

Mmmm, interesting that St Michael's Mount is mentioned in 2011 and back in 1755. This is where the St. Michael ley line starts. See my post Following In The Footsteps Of St Michael. I reckon we could dream up another conspiracy theory along these lines!