Born In A Lay By On The A614 Coincidence 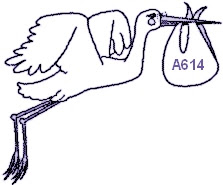 This post is in response to Bernice's coincidence story. Malcolm Lindley writes that he had a very similar story.

Malcolm was born in 1947 in Nottingham, England. His mother was to have her baby - him - in Highbury Hospital. She was admitted but then asked to move out as another woman, who had planned a home birth, was having difficulties and needed her bed.

Malcolm's mother was put in an ambulance to be taken to another hospital about twenty miles away. It seems, however, that Malcolm couldn't wait to see the world and he was born in a lay by on the A614.

Now fast forward to 1975. In Malcolm's own words this is what happened:

"My wife and I were arranging life assurance, and the salesman asked for my date of birth, and laughed, as it was the same day as his.

'Where were you born?' I asked and his reply was that he was meant to be born at home, but as there were problems, his mother was rushed into Highbury Hospital ..."

Yes, it was the insurance man that brought about the circumstances which led to Malcolm being born in a lay by on the A614. Life is definitely sometimes stranger than fiction.

So this is the third recent post where coincidences have come about after many years in between. These are the other two: