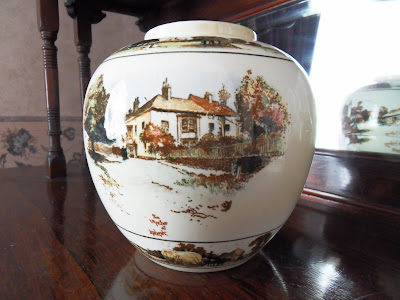 My parents always had the Coaching Inn bowl, as shown above, on their sideboard going back to my earliest memories. It dates to about 1900 and my wife and I still have this on display.

One side of the bowl, or maybe it's a vase, has a picture of The Anchor at Liphook. As I, for a change, had a little spare time I thought I'd see if The Anchor Inn still exists. It does, but looks a bit different today.

What I did find out, with the help of Google, was that Liphook in the 16th century was on an important coaching route from the English south coast and port of Portsmouth to London. The coach and horses would stop at The Anchor to rest and often stay overnight. The mail was also carried on this route.

Lots of well known 'olde worlde' English people stayed at The Anchor from Kings to soldiers.

The present Coaching Inn pre-dates 1588, when it is recorded as having a fire. There was an inn on the site as far back as the 1300s and King Edward II is said to have stopped overnight in 1320.

Others who have frequented the establishment include Lord Nelson on his way to fight the Battle of Trafalgar. Trafalgar Square in London being his memorial, with his statue on Nelson's Column.

King Edward IV, the Duke of Wellington, Queen Victoria, Lady Hamilton are all believed to have snuggled up in the bedrooms - though not together, of course.

On the 6th of August 1668 Samuel Pepys wrote in his diary:

"So to coach again, and got to Lippock, 2 late over Hindhead, having an old man, a guide, in the coach with us; but got thither with great fear of being out of our way, it being ten at night. Here good, honest people; and after supper, to bed.

Pepys spelt Liphook as Lippock and it's interesting that he used '2' as a substitute for 'too' - and we thought this was something new to the likes of Twitter and texts.

Actually this post is way off subject because I found no synchronicity or coincidences with the Anchor Inn, only disappointment of how this looks today - as in the dreary photo below. Where has the romance of Kings, Mistresses and Highway Men all gone? Oh well, such is life. The photo shows the centre of Liphook with the Royal Anchor Inn in the back ground zzzzz! (Photo: copyright Martyn Pattison)

Ah, but later by chance I did find that The Anchor does have a ghost: Highwayman Jaques.

Jaques was a robber and was shot by lawmen in room six of The Anchor but his spirit remains. He can also be heard travelling along the roads on his horse in the village.

And, also in Liphook, they have their very own fairy who plays enchanting music. He or she hides in trees, bushes and along the quiet lanes. And, another and: the area is haunted by the ghost of a pale white calf! So that's a bit more like it! 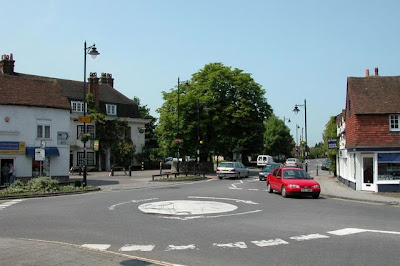 ... and this is how The Anchor, or Royal Anchor as it is now called, used to look in this painting ... how times have changed. 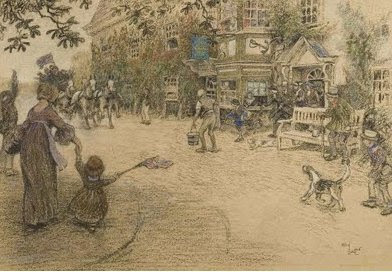 Further Posts:
St Paul's Cathedral Coincidence Cluster
Was This A Message Via An Antique Dog?
Her Husband Chimed The Clock From Beyond The Grave