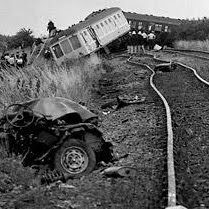 Twenty-five years ago there was a nasty train crash at a level crossing in Lockington, East Yorkshire, England. Eight passengers and a boy in a van were killed.

Christine Quinn was one of the passengers on the train who survived and was attending a memorial service.

She remembers how, twenty-five years ago, she was on the train with her one year old child. Christine told The Press what happened a quarter of a century ago:

"I threw myself over the pram to shield my son from flying glass. For this reason, I didn’t want to take him out of the pram, and a kind gentleman helped me to carry the pram up the Embankment.

We were all shaking and crying and didn’t know what to do or where to go but then buses turned up to take us on our journey.

I still get emotional when I talk about it. My son is grown up now and is a Lance Corporal in the Household Cavalry, based in Windsor. I’m so proud of him – it could have been so easy to have lost him on that horrific day."

After all these years she is still keeps in touch with a girl, Amanda, whom she met on the train.

But there is a strange coincidence to this story. One of the named passengers who died on the train, and whose name is on a memorial stone in Yorkshire, is Christine Quinn.

One Christine Quinn died while the other lived.