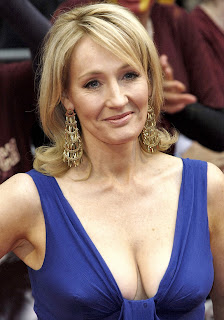 JK Rowling, the Harry Potter creator, has recently been tracing her ancestry and in particular on her maternal side.

Her mother died just prior to Jo starting to write the first Harry Potter book, so she never knew of the phenomenon that was to follow.

Jo discovered that her maternal grandfather was of French origin and became almost obsessed with discovering more about her great-grandfather Louis Volant, with whom she felt a definite bond. After a lot of effort his details were uncovered and his grave found, though this was disappointing as he was buried in a communal plot.

She discovered, however, a surprising coincidence in a room in the Paris records office - which looked to be the double of Hogwart's library. Her great-grandfather was born on the same day as Harry Potter: the 31st of July.

Other Celebrity Posts:
Alex Kingston And Her Ghostly Encounter
A Feeling Which Led To A Meeting With Bono
Spike Milligan: I Told You I Was Ill Coincidence