The Inspiration of the Poet by Nicolas Poussin 1630 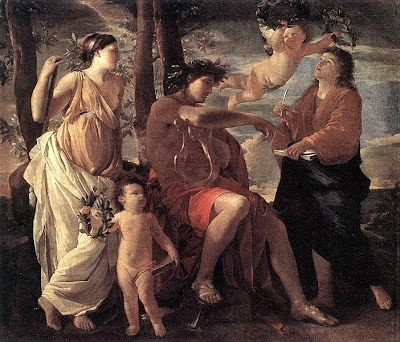 Wherever we are, God’s in that moment, God’s speaking to us, and if we’ve just got our ears open and our antennas up, there’s no lack of inspiration. He’s not silent. We just have to be listening.
Steven Curtis Chapman, Press conference after 2007 GMA Music Awards

Inspiration is not the exclusive privilege of poets or artists. There is, there has been, there will always be a certain group of people whom inspiration visits. It's made up of all those who've consciously chosen their calling and do their job with love and imagination. It may include doctors, teachers, gardeners — I could list a hundred more professions. Their work becomes one continuous adventure as long as they manage to keep discovering new challenges in it. Difficulties and setbacks never quell their curiosity. A swarm of new questions emerges from every problem that they solve. Whatever inspiration is, it's born from a continuous 'I don't know.'
Wisława Szymborska, The Poet and the World

Inspiration is a slender river of brightness leaping from a vast and eternal knowledge, it exceeds reason more perfectly than reason exceeds the knowledge of the senses.
Sri Aurobindo, Thoughts and Aphorisms

There'll be what you might call a moment of inspiration – a way of seeing or feeling or remembering, an instance or a person that's made a large impression. Like the sand and the oyster, it's a creative irritant. In each poem, I'm trying to reveal a truth, so it can't have a fictional beginning.
Carol Ann Duffy, Interviewed in The Guardian, December 4, 2005

I believe in intuition and inspiration. Imagination is more important than knowledge. For knowledge is limited, whereas imagination embraces the entire world, stimulating progress, giving birth to evolution. It is, strictly speaking, a real factor in scientific research.
Albert Einstein, Cosmic Religion

I'll get an inspiration and start painting; then I'll forget everything, everything except how things used to be and how to paint it so people will know how we used to live.
Grandma Moses, As quoted in her obituary in The New York Times

My inspirations don't come from outer space, they just come to me. I have no idea why they come when they do.
Joe Satriani, As quoted in Guitar Magazine

I decided that it was not wisdom that enabled [poets] to write their poetry, but a kind of instinct or inspiration, such as you find in seers and prophets who deliver all their sublime messages without knowing in the least what they mean.
Socrates 469-399 BC

While I was held prisoner, sweet inspiration educated me and laws were imparted to me in a speech which had no words.
Taliesin, The Tale of Taleisin

Who knows where inspiration comes from. Perhaps it arises from desperation. Perhaps it comes from the flukes of the universe, the kindness of the muses.
Amy Tan

I invented something called The Oxford Muse. The Muses were women in mythology. They did not teach or require to be worshipped, but they were a source of inspiration. They taught you how to cultivate your emotions through the different arts in order to reach a higher plane. What is lacking now, I believe, is somewhere you can get that stimulation not information, but stimulation where you can meet just that person, or find just that situation, which will give you the idea of invention, of carrying out some project which interests you, and show how it can become a project of interest to other people.
Theodore Zeldin, About The Oxford Muse Foundation

When inspiration does not come, I go for a walk, go to the movie, talk to a friend, let go... The muse is bound to return again, especially if I turn my back!
Judy Collins

Email ThisBlogThis!Share to TwitterShare to FacebookShare to Pinterest
Labels: Inspiration, Thought Of The Day