The Coincidences Of Els 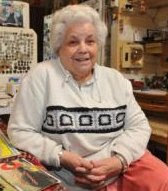 79 year old Els Toowater was born in Indonesia and so was her husband William. He sadly died recently. Trawling through her memories she realised that there were several coincidences in their relationship.

Though both brought up in Indonesia they met in Holland. The family Rocekamp, as Els was then called before marriage, rented the third floor of a house belonging to Mr Toowater's grandmother. This was just after the end of World War 2. This all came about because Els and William's grandparents knew each other - as they had met in Africa!

William, then 17, spotted Els on the stairs one day. She noticed that he was wearing a hat with the initials ELS. Once he had found out her name he told her, "I like your name because I always have it on my hat." In this instance though the ELS stood for European Lage School. This was a primary school he had attended in Java.

Els Toowater now lives in Australia and nearby is ELS Hall Park in North Ryde. This time the ELS refers to Edward Lester Septimus Hall who was a mayor of Ryde in the late 1940s, 50s and early 60s.

It could have all been so different for Els and William: if their grandparent's hadn't met in Africa; if Els family had never rented part of a house belonging to William's grandparents in Holland; if William hadn't been wearing a hat with the acronym ELS; if ...

... but when we look at any of our lives there are usually lots of 'ifs' that have brought us to where we are now and with the people we are now with.

Els and William raised a family of two daughters and one son, thanks to those ifs.