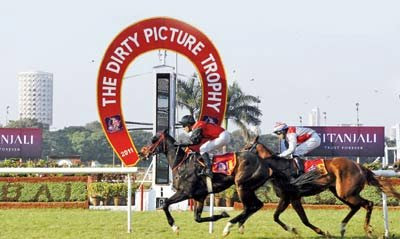 I have to admit that I had never heard of Silk Smitha the Bollywood actress before I came across this coincidence story. She was born on December 2, 1960 and died mysteriously on September 23, 1996, the popular opinion appears to be that she committed suicide. According to Wikipedia Silk made 450 films in her seventeen years as an actress. 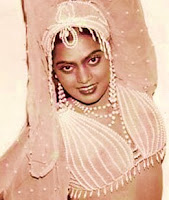 She became famous for her extremely sexy dance numbers and was sometimes referred to as the 'bold dancer'.

A film has recently been made of Silk Smitha's life titled Dirty Picture. To promote the movie the director Milan Luthrie along, with the actor Vidya Balan, attended the Mahalaxmi racetrack to watch a horse race sponsored by the Dirty Picture's backers.  The race was appropriately called The Dirty Picture Trophy.

In the movie there is a scene set at a race course where a rank outsider horse - owned by Silk Smitha - caused a massive upset by winning the race against all the odds.

Now here comes the coincidence:  The winner of the The Dirty Picture Trophy was also a rank outsider, which didn't appear to have any chance of winning.  Oh and the name of the horse? Bold Dancer!