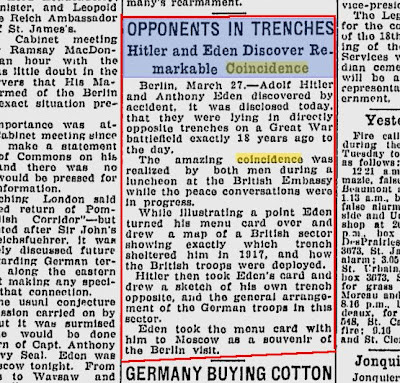 I was given this clipping from a 1935 newspaper because it contains a coincidence. The two 'stars' of the small story are Anthony Eden, Britain's then Foreign Secretary, who went on to become Prime Minister in 1955 and Adolf Hitler.  Here's the story in case the clipping isn't too clear:

Berlin, March 27 - Adolf Hitler and Anthony Eden discovered by accident, it was disclosed today, that they were lying in directly opposite trenches on a Great War (World War 1) battlefield exactly 18 years ago to the day.

The amazing coincidence was realised by both men during a luncheon at the British Embassy while the peace conversations were in progress.

While illustrating a point Eden turned his menu card over and drew a map of a British sector showing exactly which trench sheltered him in 1917, and how the British troops were deployed.

Hitler then took Eden's card and drew a sketch of his own trench opposite, and the general arrangement of the German troops in this sector.

Eden took the menu card with him to Moscow as a souvenir of the Berlin visit.