The Impossible Happens In A Small Village Hall 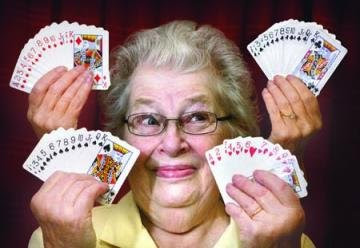 Wenda Douthwaite, 77, from Kineton in Warwickshire, England witnessed an 'impossible' happening in her village hall. Those mathematician blokes reckon that the odds of this happening are 2,235,197,406,895,366,368,301,559,999 to one. In other words it's something akin to finding a specific drop of water in say the Pacific Ocean.

Mrs Douthwaite was at the village hall for a whist drive and was playing with three other over 70s Ron, Norman and Alan. She explains what happened:

"The cards were shuffled, cut and dealt as normal but that was the only thing normal. And it was the first game of the night as well. As soon as I picked up my cards I saw I had a complete set of spades.

Suddenly someone around the table said they'd got a complete set too. We compared cards and were totally shocked when one of us had all the hearts, another had the diamonds, another had the clubs and I had the spades. I was shaking when we laid the cards down on the table.

I think the expression is gob-smacked. It's just a pity the Guinness Book of records wasn't there to witness it."

The dealer of the cards, Ron Coles, assures us there was no monkey business going on. He said, "I would swear on my grandchildren's lives it was not fixed. It was one of those strange things that happen in life now and again."

So is all of the players being dealt a full set of cards in whist such a big thing? Well you've seen the odds of this actually happening (28 digits!) and 'experts' have said that it is unlikely to happen again and probably never has before. Unless you know differently, of course ...