The Truro Journey To Ancient Egypt 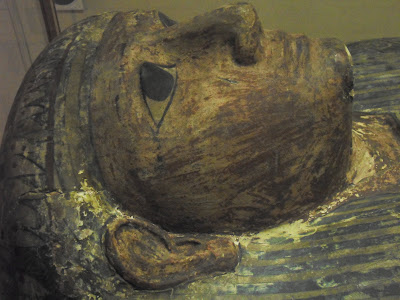 My wife and I went into Truro yesterday. It's about 15 miles from where we live. Karin had to go for a check-up at the dentist so I wandered around the city on my own.

As it was raining one of the places I visited was the Royal Cornwall Museum, which is housed in a lovely old building dating back to 1845. I hadn't been there for years and years so lots of stuff on display that I didn't remember. One was a small Egyptian Room.

The room is quite small and in the middle is a coffin of an Egyptian mummy from about 650BC (photo above). There are the remains of an actual mummy to one side, housed in glass.

To walk round the coffin there is only a small pathway. Being on my own it all felt quite strange, the museum was completely quiet and there I was alone with a mummy and a decorated coffin. I felt as if I was going to receive some sort of information or hear a voice - very fanciful and neither happened!

When we got home, however, I looked through a newspaper and there was this article on Tutankhamun. An author, Mark Beynon, believes that the often talked about curse was a smoke screen as all of the mysterious deaths, following the opening of Tut's tomb, were in fact the work of Aleister Crowley.

Beynon is quoted as saying, "When I researched these deaths, Crowley's name popped up again and again. There is plenty of circumstantial evidence linking him to all the deaths. I have just put all the pieces of the jigsaw together."

I have written previously about the The Curse Of The Pharaohs. More than 20 people linked to the opening of Tutankhamun's burial chamber died in bizarre circumstances. This was described at the time, in the newspapers, as being brought about by an ancient curse.

According to Beynon all of these deaths were down to Crowley, whom he describes as a satanist.

Crowley was infamous in the 1920s and 30s as being the most evil man in the world: the Beast 666 and so on. What he actually did was to create his own philosophy called Thelema, which just happened to be based on Ancient Egyptian religions.

Crowley claimed he was a prophet and was being led by the Egyptian god Horus. His doctrine for life was 'Do What Thou Wilt'. Many believed this meant that people should do whatever they wished. I see it as being that we should be guided by our conscience.

Back to those deaths. According to Mark Beynon five of the locations of the deaths form the shape of a pentagram. I haven't seen details of these to check out but spooky if true.

So my trip to Truro led me to Ancient Egypt! Oh and clean teeth for my wife - below is the view from her dentist's surgery, with Truro Cathedral in the background. It looks nice when there's sunshine and blue sky! 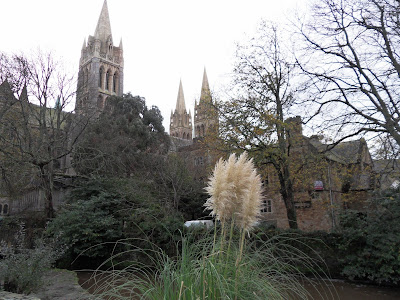 Further Reading:
The Curse Of The Pharaohs
Ancient Egyptians And Their World Of Dreams