What A Coincidence That We Are Actually Here Now 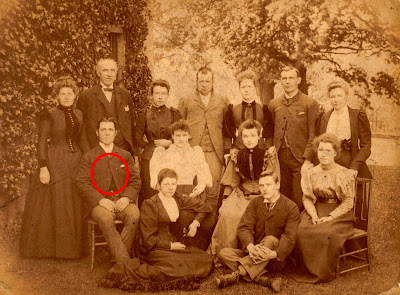 My daughter-in-law has started to trace my family tree. She wants to do this so that my grandson, Samuel, will know where he comes from later in life. He's only 15 months so it'll probably be a while before he's interested. But when he is the facts and photos will be there for him.

So far she has got back to John Perry in 1830 and on my mother's side of the family to about the same period. My mother's birth surname was English.

One coincidence, which I already knew, was that both of Samuel's great-great-grandfather's - Perry and English - had the same first names of Frederick William.

The photo is of Frederick William English - with the red ring. He died way before I was born but I have always felt close to him for some reason. Maybe it's because I have his old fashioned gold tie pins and cigarette cases, which have been handed down to me. I have mentioned him previously - as I found out from my mother, just before she died, that he kept a Buddha on his mantelpiece - and I have done the same for thirty plus years. Another coincidence, or maybe something more.

I've never really tried to trace my family's ancestry previously but it gets to be quite fascinating. One of the things it illustrates is how us, actually being here at the present time is down to a mighty lot of coincidences.

If John Perry, back in 1830, hadn't met his wife I wouldn't be writing this now as I wouldn't exist - nor would my son, grandson etc. etc. And it would also have affected my wife's life as she would then never have met me.

We seem on first glance to be creatures of pure chance - unless, that is, it is all pre-planned, which doesn't really seem possible.

Our lives and very existence have been brought about by coincidences and synchronicity. It makes you think, doesn't it? We are all special to be here right now. Wonder why so many of us never appreciate this.