Coincidences And The Portuguese Rooster of Barcelos 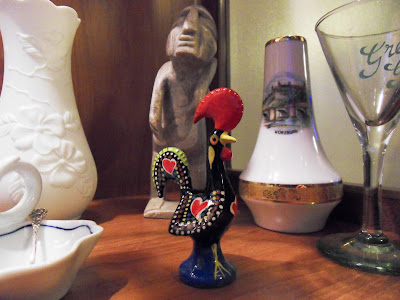 I was at Darren's blog Just Watching The Wheels Go Round where he has written a post titled 'Number 23 ..???'.

As I read the post I noticed a few coincidences. Darren said his birth date is on the 23rd, so is mine. He mentioned a Portuguese Rooster ornament he has. I have one too though slightly different. I brought it back from Portugal a few years ago, and it has a red heart on it's chest, as does Darren's. And last year I also wrote a post about the number 23: The Mystery And Enigma Of The Number 23. Oh, and my son is also called Darren.

So a few connections there.

The photo shows my Portuguese rooster, which is in a cabinet with some of our travel souvenirs.  The stone figure at the back of the picture was hand carved in Morocco.

I remember buying the rooster as our son was with us.  There is a story to go with the ornament, which is very popular in Portugal. It's called the Rooster of Barcelos

The story goes that back in the 17th century, though some say 15th, lots of silver, including silver cutlery, had been stolen from a prominent landowner in Barcelos. The search was therefore on to discover who had committed this crime.

Conveniently suspicion fell upon a man from nearby Galicia. He seemed as likely as anyone, even though he immediately pleaded that he was completely innocent, and was only passing through the town on a Pilgrimage to Santiago de Compostela. Despite his pleas he was arrested and condemned to hang.

He demanded that he should be taken to see the judge who passed the sentence. The wish was granted and he was taken to the judge's home where a banquet was being held. On the table was a roasted rooster ready to be eaten by the guests.

Again the man insisted he was innocent. He pointed to the rooster and said, "It is as certain that I am innocent as it is certain that this rooster will crow when they hang me."

All of this didn't sway the judge's opinion and the man was taken away to be hanged.

As he was being hanged the rooster - remember he had been roasted! - suddenly stood up on the table and crowed. Needless to say this is very unusual.

The judge was shocked and realised he must have made an error. He rushed out to save the man and was surprised by what he saw. The man was still alive. Somehow the knot in the hangman's rope had miraculously came loose as the trap door was released.

The man was set free to finish his journey of pilgrimage. Years later he returned to Barcelos to sculpt a cross of the crucifix dedicated to the Lord of the Rooster.  This can still be seen and visited at the Archeological Museum of Barcelos

I remembered this story at Christmas when, as there were thirteen of us at dinner and me the only vegetarian, I had to look at a turkey carcass.  I thought it would have been amusing if it had crowed, might then have got a few more veggie recruits!