A Mysterious Signal From The Universe 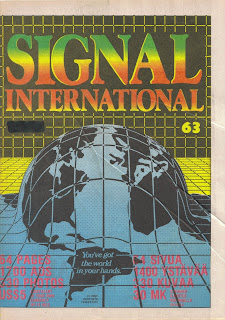 Well, whoever or whatever is controlling 2012 has a sense of humour, so that must be good news.

I was thinking about an aspect of my life - I'll keep what that actually was private - but I was wondering if I should continue with something I have been doing or stop, and move on to something else.

In a quiet moment I asked for a signal or sign as to what I should do.  The 2012 controller didn't give an immediate response so there was no flash or inspiration or even a fanfare of trumpets.  As with any request for an answer I left well alone and allowed whoever or whatever time to do their stuff.

This morning a package arrived from Finland.  It was from someone I did a bit of business with when I published several magazines from home.  I had a business /  money making magazine, Wealthy Times; a penpal magazine, Drifter, (anyone remember penpals or penfriends?) and a few others.  Nothing with a very big circulation, I used to get 2000 copies of Wealthy Times printed at a time.

However at the end of 1997 I felt it was time to move on to something else so I ended ten years of magazine publishing - but this morning there was this package I  mentioned. Inside were two of the publishers magazines - and the name of the magazines? Signal.

It looks as if I received my signal from the Universe, that I had requested!  A letter inside mentioned that it was from 'your Finnish friend'.

So a Signal and the word Finnish.  That must surely be my signal to finish what I was asking the Universe about.

It was very strange to receive the package because, as I said earlier, I stopped publishing magazines 13 years ago and hadn't heard from Finland since then.  Odd, spooky, funny, peculiar .. or something more down to earth? Oh and one of the postage stamps (right) on the package made me smile. It seemed to fit well: a small boy writing a request.

The Universe always answers when we ask questions in the right way - but not always quite in the way we expect.

Further Coincidence Posts:
What a Coincidence That We Are Actually Here
The Lowestoft Postcard Coincidence
Music Album Covers Predict 9/11