Woman Donates A Kidney To A Stranger 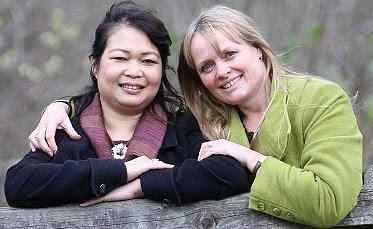 Here we are in 2012.  But it doesn't really feel any different does it? It's simply another day, no matter what importance we may attribute to it.

Being 2012 won't alter anything. Only we, ourselves, can change our lives and the world in which we live. I thought therefore I'd start this year with a quite remarkable story.  One that illustrates the goodness that is inside some people.

Veronica Buttigieg, from Leigh on Sea in England, is a Christian but she isn't like those silly priests recently fighting each other in Bethlehem. She actually follows her beliefs - some might say to extremes.

Veronica was at a party for a wedding anniversary and got chatting to a lady called Manoly Viravong. The two had never met before and they eventually started discussing health matters.

Manoly had been waiting for a kidney transplant for two years.  Her kidneys were deteriorating and she had to endure eight hours of dialysis every night.

She told Veronica how her brother had been considering donating her a kidney but had changed his mind.

Veronica's amazing response was to say, "Why not have one of my kidneys."

She explained, "I barely knew Manoly but after talking to her and hearing of how desperate she was, I felt it was the right thing to do,"

She went on to say, "I am a Christian and I felt God said it was right.  I had a real peace about it because I knew it was what God wanted me to do.  I felt completely calm."

Two days after their meeting Veronica went to the hospital to see if her kidney would be compatible and miraculously it was. In July of this year the operations took place at the Royal London Hospital and the two have now become the closest of friends

Manoly, who was originally from Laos, said of the whole experience: "My life expectancy was very short - it (her kidneys failing) would have killed me eventually.

I had been feeling very low because my brother had changed his mind about giving me his kidney, yet here was a virtual stranger offering to do an amazing, wonderful, selfless thing for me.

I can't really thank her enough.  We are very close now, like sisters. I'm really grateful to her and I count my blessings every day."

As for Veronica, she is back at work, going to the gym and is coping well with one kidney. She said, "I have no regrets and I would do it again tomorrow."

Many of us probably haven't the strength of character to offer a complete stranger a kidney but we can all help others - friends and strangers - in smaller ways.  By doing so we also help ourselves and, who knows, 2012 could then turn out to be a very special year for us all.

Further Reading:
Circles Of Goodness Can Change The World
Kindness Plus Gratitude Equals A Trouble Free Life
60 Things To Put The Sparkle In Our Lives