The Angels Solution To Our Problems 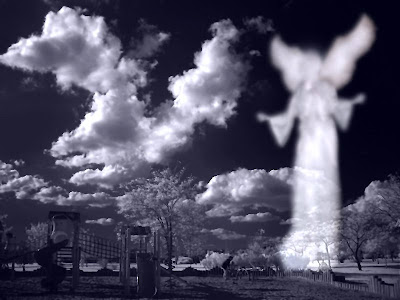 After my best friend of some 30+ years died his wife gave me some of his books. Amongst these were several from the Seekers Trust, often these included information on angels.

One of these publications, The Magic Of Angels, was written by a medium who received the teachings mentioned in the book through channeling a Dr.Lascelles.

I have no proof that channeling is genuine, but my friend did believe in such things and had no doubt that we survive Earthly death. He was a reflexologist and was once told that he had been some sort of healer in a previous life.

I picked up this book again, after I had been thinking about how different all our lives would be if we all believed in a God or Supreme Power and that we are immortal - but, as John Lennon wrote, we would also have to imagine no religion too!

As can happen when we are thinking about something I opened the book (p.176) and read:

"What if you really did believe that the room in which you sit was full of angels? ... Can you conceive it? Well it is a fact. Digest that for a moment and then think again - power is being poured down upon you and upon earth every moment of the day and night. All you have to do is ask for the help which is always available.

Once the immortality of man and his soul is established upon an indisputable basis and it becomes the rightful study of mankind there will be no barriers and the ugly world of divide and rule will be a thing of the past."

The Doctor, who was being channeled, said later on the page:

"Do not become bogged down in clever catch phrases, do not philosophise and pretend you know everything - you know very little and need to know little. What you need is to act.  You need to take the extended hand of help and friendship, which is ever awaiting your awakening."

And further on he continues:

"Help is there for the taking.  For a short moment pause and think how you would feel if the burdens which oppress you could be removed. Imagine how you would sigh with relief. Think how you would relax if you knew that your troubles could be taken from your shoulders simply for the asking."

The book ends with this sentence, "The guides or ministering angels, rendered service to Jesus because He knew of their powers. If you ask also, your ills will be healed."

As I was saying earlier: how different our lives would be if we all believed.

Further Reading:
The Mystery Of The Angels Of Mons
The Bird Angel Who Comforts As Someone Dies
The Dead And Dying Are Trying To Contact Us