The Lunar Ritual That Worked In An Unexpected Way 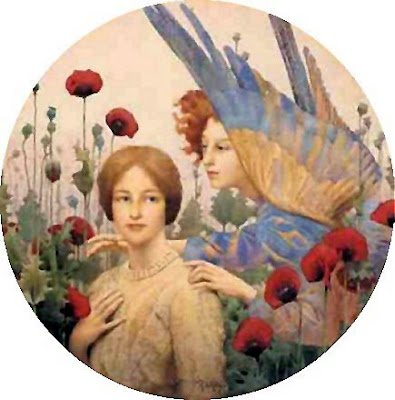 Some of us visualise or create an image when we want to attract something or other into our lives. Others do an evocation ritual to gain a similar affect.

This post is about a Welsh woman, I'll call her Gwen,  who wanted to learn more about alchemy.  Okay she could have done a Google search but she wanted something more personal and meaningful. So she chose to perform a magical ritual.

The invocation was to Sophiel, a lunar spirit, who has been described as one who 'teacheth the knowledge of herb and stone.'

Gwen carried out the ritual on a Monday at the full moon which is, supposedly, a good time to contact lunar spirits.  Unfortunately nothing happened.  No lunar spirit materialised so she simply asked for help in interpreting alchemical texts. Still no immediate response or flash of thunder, or whatever else should happen on such an occasion.

However, exactly nine weeks later to the day, Gwen was at a conference.  Afterwards an elderly American gentleman walked straight up to her and her opening words were, "Are you interested in Alchemy?"

A coincidence some will say, but Gwen would answer that 9 is the Lunar number of the cabbala (kabbala).

The elderly American gentleman and Gwen met up the next day and he spent twenty-four hours helping her understand the subject - and, yes, I'm still talking about alchemy!  He also put her in touch with a group of practical alchemists.

So Gwen's ritual did work.  As to whether she would have got the same result with visualisation or something similar is debatable.  Some will say that it was a chance meeting but there is also a saying that when the time is right the teacher will find us.