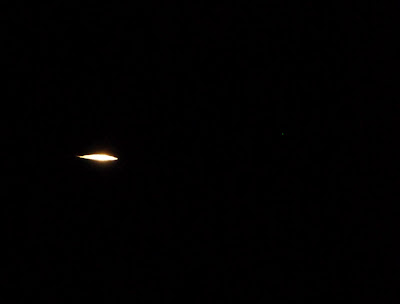 There were 'things' in the Cornish sky last night. Okay, they might just be stars or planets - Jupiter can be seen near Venus at the moment for example - but these are my own photos. They haven't been retouched other than by cropping or enlarging for clarity.

The photo above was taken 18th of March, 2012 at about 9pm. As can be seen it shows a white light and also you might just be able to make out a very small green light towards the right of the photo. I have enlarged the green 'star' or whatever (and no, it wasn't an aircraft light!) as below.

I'm no astronomer so perhaps others can say what these might be - I'm not claiming it is a UFO but, I guess, as I don't know what it is then it is unidentified. 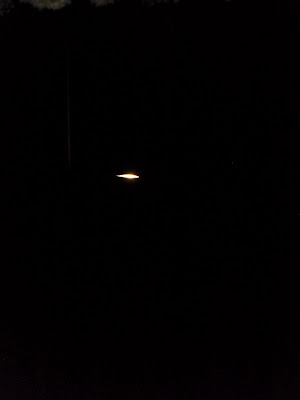 There was also a red star / planet, maybe Mars? Photo below, which has been enlarged and cropped to show the red blob. 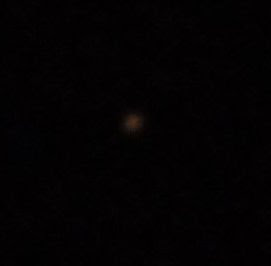 Going back to the green star/planet/whatever it's interesting that some 'experts' write on the Internet that there is no such things as green stars. See for example Why are there no green stars.

NASA, however, state that stars can be any colour, including green. To quote: "The reason that people do not often mention green stars is simply that green is in the middle of the visible spectrum. Therefore a star that gives off a plurality of its light in the green (similar to our Sun), also gives off lots of red, orange, yellow, blue and violet light. When we see this mixture of colors it usually appears white or yellow."

On the website Astronomy Central they say that on the 19th of March, the day after I took the photos, the following planets can be seen from the UK: Venus, Jupiter, Mars, Saturn. So perhaps what I saw were simply planets but there again ... the top photo doesn't look how I imagine a planet to look.

I must search the sky more often. I only did so last night as my wife went outside for something and then called me to look at the strange stars.