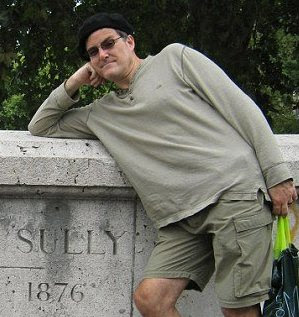 Perhaps it helps if you have some inside help, say, from up on high.  Vicars Andrew Sully and Mary Stallard from Llangollen in Wales seem to have had a problem sorted pretty efficiently.

The couple, with children Joanna and Cerys, were in a canoe on a French river in the Dordogne when it capsized after they managed to hit a bridge.  Fortunately they were all okay. The only loss was their digital camera.

Of course a new camera can easily be replaced, and quite cheaply nowadays. What the vicars had lost though, were all of the photos they had taken. Mr.Sully had completed a cycle ride to Paris for charity and all of the pics of this and their holiday were lost.  He tried diving into the river to look for the camera but it was too murky to see anything plus there was quite a strong current.

After their holiday they returned home. Two weeks later they received an email from a Kevin Quirin who had found their camera on a scuba dive in the very same river. The camera was broken but inside the camera card was okay, with all of the photos intact.

But how did Kevin find out whose camera it was?  He did some detective work after putting the camera card into his computer and looking at the photos.

Two of the photos showed a man next to signs with the name Sulley (as per the photo at the top of this post) - so he deduced that was that this was the man's name.

There were other pictures of the vicar at the charity cycling event in Paris, so a further clue. Kevin went to the charity website JustGiving and, low and behold, there was the name of someone called Sulley - Andrew Sully. From this the vicar's contact details were obtained.

So Kevin Quirin was able to return the card and 100 photos to Andrew and Mary - with a little help of, well, who knows.  But it's always good to have friends in high places!

P.S. The charity that Andrew Sully was supporting with the cycle ride was Christian Aid