The Secret London Stone The Stone Of Brutus 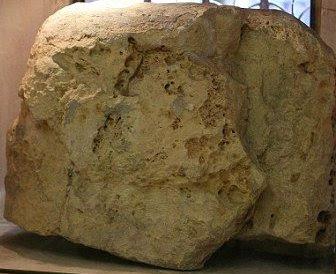 "So long as the stone of Brutus is safe, so long shall London flourish", so says an ancient legend.

London Stone or the Stone of Brutus, as it is sometimes called, is one of the lesser known secrets of London, England. Most tourists would never get to see the stone and, if they did, might be disappointed with what they find. Nevertheless it's history reaches back nearly 3000 years.

One story of it's origins takes us back to Brutus the Trojan founder of London.

Brutus fled his homeland and was guided by the goddess Diana to the island of Albion, where he fought and defeated a race of giants before founding 'New Troy' – later called Londinium and then London. This is dated as all having taken place in 1070 BC. It is believed that the stone was part of an altar in a temple built by Brutus to Diana. Another theory is that it is a segment of a stone from an ancient Stonehenge style circle.

As with all ancient artefacts there are differing versions of what the stone may be. Some even claim it is the stone from which King Arthur withdrew the magical sword excalibur. Others argue that it was used as a sacrificial altar by the Druids. All that can be certain is that it is very old and has been revered as part of London's history.

The very first Mayor of London, in 1189, was Henry Fitz-Ailwin de Londonestone - meaning Henry, son of Ailwin of London Stone.

Sacred stones are part of British history. John Dee, 1527–1608, occultist and adviser to Queen Elizabeth I, believed London Stone had magic powers and Kings and Queens of Britain are still crowned on the Stone of Scone in Westminster Abbey.

One story, dating from the 16th century, holds that the relic was the symbolic centre point from which every distance in Roman Britain was measured.

Whatever the truth England needs to keep the stone safe if we want London, and therefore England, to flourish.


London Stone or the Stone of Brutus is a block of oolitic limestone, which does not occur narurally in London. It measures approximately 53x43x30 cm or 21x17x12 inches.