Ghosts At The Trocadero Pub Birmingham 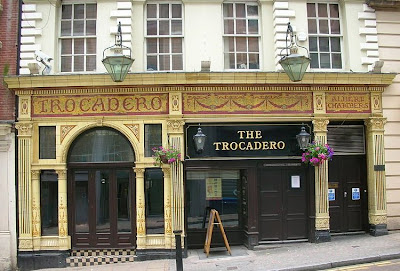 The Trocadero is a pub in Birmingham, England and sometimes, while sipping their pints of beer, a waft of burning wood may reach the nostrils of those who sup. For the Trocadero is haunted, with the smoke leftover from the late 1800s when the building was used as fire station. But there is more than just a whiff of ghostly smoke here, there are also the ghosts themselves.

One of the main ghostly visitations is made by a former landlord, Henry Skinner, that's him in the photo. He wanders the pub knocking over glasses, moving beer mats and even throwing coins through the air.

The present landlord's good lady, Kayleigh Thomas says, "I’ve never seen Henry, but I’ve heard him many times. He tends to knock over glasses and leave things out. You’ll open up and find some very strange things have been placed on tables, such as clocks. But his party piece is making the money in fruit machines rattle. That can be a bit un-nerving when you’re the only one in the room."

She added, "I’ve worked in a number of haunted pubs, but the Trocadero has the most activity, definitely."

Henry Skinner, it seems, had an untimely death on December 5th, 1895. He had an argument with Herbert and Arthur Allen that led to a gun shot being fired. The Birmingham Gazette, at the time, reported the incident thus: "The bulldog pattern bullet, quite capable of felling an ox, buried itself in the wainscoting. Skinner turned back towards the noise and the next shot caught him in the side of the chest as he turned."

As well as the wafting smoke and Henry Skinner haunting the Trocadero two girls who fell to their deaths from a spiral staircase also like to frequent the building now and again.

So, a pub with ghosts is no doubt good for business - all spirits are served.


Wikipedia has a short entry for Trocadero. It simply says: "The Trocadero, 17 Temple Street, Birmingham, England, currently a pub, is a dazzling demonstration of the use of coloured glazed tile and terracotta in the post-Victorian era of architecture. Formerly the Fire Engine House for the Norwich Union Insurance Company (1846, Edge & Avery), it was altered in 1883 to make the Bodega wine bar. It was given the current colourful glazed front in 1902 when it became the Trocadero. It is Grade II listed."

Other Ghostly Posts:
The Tickling Ghosts
The Ghost Photo Of The National Maritime Museum
The Dead And The Dying Are Trying To Contact Us