Weird Photo Of A Testicle With A Face 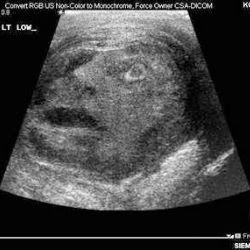 This is very weird. In February of 2011 I published a post titled The Bizarre Case Of The Haunted Scrotum. This shows a CT scan of a man's testis looking very much like a haunted face. Now here's another similar photo.

The picture on this post claims to be an ultrasound image, again of a man who had a 'mass in his testicle'. As you can see it shows what appears to be a face of a man who looks to be in pain - and in the circumstances, why wouldn't this testicle be in pain!

There is a quote said to have been made by Dr G Roberts of the School of Medicine at Queens University, Kingston: "It looked like a man screaming in pain, which I thought was hilarious considering the clinical picture of the poor guy."

And there I was thinking that doctors were a sympathetic bunch, appears not.