After 33 Years They Meet At A Bus Stop By Coincidence 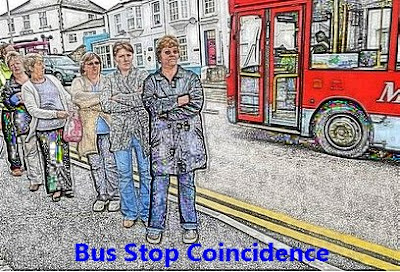 Today's coincidence story from Annie appears to have no reason, it's just a reminder of times past - perhaps a sort of a memory jog.


My family emmigrated to Canada from Swansea in Wales in 1977, when I was 9 years old. In 2010, I returned for my fourth visit to Swansea to see family and old friends.

I was standing at a bus stop on a main road, close to where my relatives lived, but not near my old home. A woman, about my mother's age, came down a set of steps close to the bus stop and asked me if I knew if a certain bus had already gone. I told her it had just left.

I asked her if the bus I was waiting for went to a road close to where my old house was, as I was going to visit our old neighbours. The woman said the bus no longer went that route and then explained the route it did travel.

She asked where I was going and I said Glenside Road in Portmead. She said she used to live in a road just off Glenside, called Oakview but moved away years ago.

She asked who I was going to visit and I said the folks’ surname. She said she knew them.

I said maybe you knew my parents and I gave her our surname. Her eyes opened wide and she said "I’m Rena". I looked at her and said, "Georgina," and we both laughed.

This was a woman I had not seen for 33 years and who used to babysit us kids – and whose dog bit me. Rena was a friend of my Mom’s and had two daughters, one whose name was Georgina.

We laughed and I snapped her picture and then my bus came. We had just long enough to have that brief interchange and I left. I continue to shake my head about 'what is the chance this can happen?'

I’m thousands of miles from home, at a bus stop in a city I visited 4 times in 33 years and a woman comes to my bus stop, not planning to take the same bus as I was, we talk and get to the point where we discover we knew each other back when - and in a city of 220,000 people.

What the purpose of the meeting was I do not know – no further contact was made by either of us. I did manage to bring the photo home and show it to my parents. My mom did not recognize Rena from the photo but when I told her about our meeting she did, we all laughed.