Coincidence Of The Bootylicious Spotted Hippo 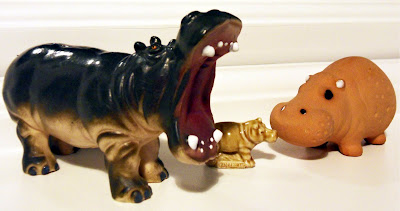 When my son was little - he's now grown up with a son of his own - we used to call my wife Hippo. How or why this came about has been lost in the mists of time. She's not hippo-like at all! Karin is only 5'3" tall and of slim build.

The nickname, however, stuck and even today I sometimes call her Hips.

Needless to say she was none too pleased with this name, especially when we developed this into a 'spotted hippo' game. She would have to go off and hide while Darren and I hunted the spotted hippo! She detested the game, can't think why.

When our son was small enough to fit into a supermarket trolley he would call out after his mum, if she was out of sight, "Hippy, hippy, hippo where are you?" much to other shoppers amusement.

Because of the name Karin even started to receive hippopotamus ornaments from family and friends, as per the photo above.

The 'spotted hippo' name has hung over her for many, many years but by complete 'accident' (coincidence) I found out what this name means according to the Urban Dictionary and it's good news (I think!) Here's the definition:

Spotted Hippo: An erudite idiom for beauty incarnate i.e. 'That girl over there, she's a spotted hippo!'
It can also mean: beautiful, bootylicious, hot, fine.

Of course, I must have known this all along - not sure if she'll believe me though.

Email ThisBlogThis!Share to TwitterShare to FacebookShare to Pinterest
Labels: Coincidence and Synchronicity, Hippo