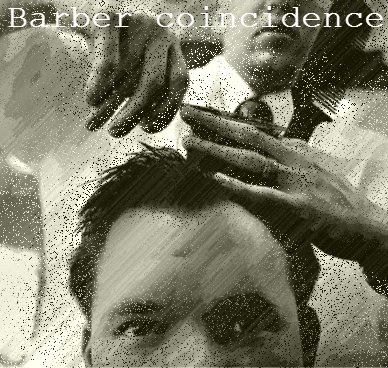 Two men became very good friends while they attended Flint Barber College in 1963. As happens in life they somehow lost touch with each other and hadn't spoken for about 48 years.

Bob Sisk, 66, who has a barber shop in E Ganson Street in Jackson USA, decided that he and his wife Shiela would spend some time seeing the sights in Gulf Shores, Alabama.

Another barber, Dan Needham, 67, who has a barber and beauty shop in West Branch, also decided he and his wife Sandy should also head for the Gulf Shores.

While on their vacation the two men needed to go shopping. It seems that Bob needed potatoes and Dan fancied some bananas.

Dan decided his best bet was to head for Walmart but for some reason pulled into a local grocers instead. Sitting in the car next to him was Bob and, as some men do, they got chatting about their cars.

Dan noticed Bob's University of Michigan shirt and they moved on to the subject of where each of them were from. They established that Bob was from Jackson and Dan from West Branch.

This is how their conversation went according to Bob:

So yes, as you've obviously guessed, these were the two men who went to Flint Barber College way back in 1963 and hadn't, up until that moment, seen each other since.

Bob said, "You really think something like this is intended by a higher power. Your heart just goes out." And Dan pretty much agrees. He added, "Being a little bit spiritual, quite a bit spiritual, I think I was meant to see Bob again."

Which just goes to show that you never know who you might meet when you go shopping while away from home.