Golf Hole In One Coincidences 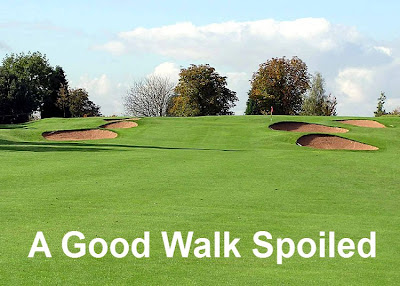 Seen it, done it! That's what the Fargo Davies golf team coach was probably thinking. But he's changing his mind now. This is what he said, "In all my 22 years of coaching, I don’t know if I’ve heard anything like that happening."

So what happened that impressed the experienced coach so much? Well a coincidence of course, and this is it.

Two of his young golfers, by the names of Colin Larson and Brandon Winter, both hit holes-in-one on hole number 4 at the Rose Creek Golf Course. It's a par 3 hole seemingly and Colin and Brandon were in a qualifying round of team try-outs.

Okay but lets look at the coincidences - yes, there's more than one:

~ As I've said, both players had a hole-in-one on the same hole.

~ Both players had identical shots: Their shots were short but bounced off the cart path, onto the green and plop into the cup.

It appears that this sort of thing doesn't happen too often in the world of golf. The Golf Pro, Matt Cook, at the course says there are an average of 15 holes-in-one every year at Rose Creek but only once has there been two holes-in-one on the same day. He went on to say, "To have it happen on the same hole and basically in the same team of golfers is pretty unique. I wish I would have been out at the course to see their reaction."

As for coach Steve Kennedy he commented, "I can’t recall any of my players ever hitting a hole-in-one in practice or during a tournament. I know some of them had holes-in-one but to have two in one day on the same hole, it was exciting."

I'll apologise in advance if I haven't used the right golfing terms but golf does nothing for me - the old saying rings true as far as I'm concerned: It's a good walk spoiled. 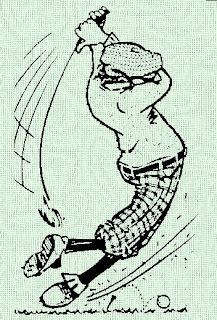 I also think it's a little funny, golf that is:

I've asked my friend to seek psychological help as he treats golf as if it were a game!

After a long day on the course, an exasperated golfer turned to his caddie and said, "You must be the worst caddie in the world." "I don't think so," replied the caddie, "That would be too much of a coincidence."

A man came home from a game of golf to be greeted by his young son. "Daddy, daddy!" he cried, "Did you win?" "Well," explained the father, "in golf it doesn't matter so much if you win. But I'll tell you one thing - I got to hit the ball more times than anybody else."

My golf is definitely improving. I'm missing the ball much closer than I used to.

What's the difference between a golf ball and a woman's G-spot? A man will spend an hour looking for a golf ball. Just included this one in case you were falling asleep!

Well, caddie, how do you like my game? It's terrific. sir. Mind you I still prefer golf.

Golf is a game in which you you yell 'fore', shoot six and write down five.

Golf was once a rich man's sport, but now it has millions of poor players.

A golfer has one advantage over a fisherman. He doesn't have to produce anything to prove his story.

Email ThisBlogThis!Share to TwitterShare to FacebookShare to Pinterest
Labels: Coincidence and Synchronicity, Golf