The Holy Well That Saved a Saints Head

As regular readers will know I like visiting churches, even though I belong to no organised religion. And I like them even more if they have an ancient legend or story attached. While on my recent visit to Somerset I found such a church: St.Decuman's at Watchet.

The church goes back to the 12th century but the site is associated with various forms of worship back to at least 700AD - plus it has it's very own Holy Well.

The church is named after St Decumen, whose an interesting fellow. He arrived at Somerset from Wales in around 700AD travelling across the Bristol Channel on a raft with just one companion - a cow!

He became a hermit and managed to initially survive by living off the produce of his cow.

As happens with hermits they are not to everyone's liking and a Pagan is said to have tried to kill this saint in the making - and for good measure cut off his head.

But no worries for St Decuman he simply picked up his head, washed it in the Holy Well - though it wasn't actually 'holy' at that time - and placed it back on his body.

This obviously impressed the local people, to say the least, so they got together to help Decuman build a church. And that's where St.Decuman's Church and the nearby Holy Well are situated today.

It's interesting that the Holy Well, as per the photo above, has been preserved and restored by a partnership between the local Church and the local Pagan society. Pagan's claim that Pagan Celts worshipped at the long before Decuman arrived on the scene.

Karin and I went to the Holy Well before going inside the Church. We were lucky as two of the church wardens were inside and asked us if we would like to go up some stone steps, behind an old door, to the top of the church, not normally open to the public. So we were privileged to be able to look down on the church from on high.

And a final look at the Holy Well - we doused ourselves with the clear water as Pagans and Christians have done for over a thousand years. Prevention is better than cure! 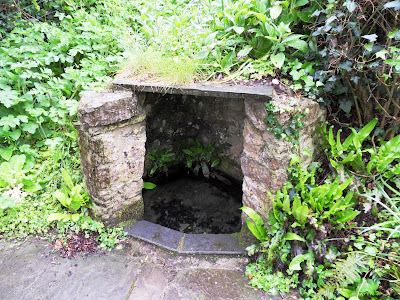