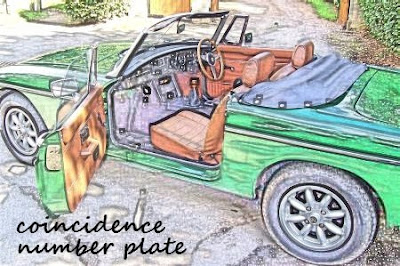 My thanks to JC for providing the following coincidence. It's a bit complex but this makes it all the more amazing. The actual car number plate mentioned, in the story, has been withheld for privacy reasons.

In 1976 I bought a second hand MGB from a dealer in Chalfont St Peter, Bucks. A month later my wife said that she thought that there was something strange about the number plate of the MGB. She looked in the files and found that it was exactly the same number plate, both letters and numbers that was on the A40 sold 4 years previously.

Fearing that that there may be something illegal about out 'new' car I obtained details from the DVLA. This is what had happened.

The person who purchased the Austin A40 from me moved to Norwich with the car and sold it to someone in Norwich sometime later.

The new owner of the A40 also owned an MGB and legally transferred the cherished number plate to the MGB.

That MGB was later sold to someone locally in Norwich who subsequently moved to Chalfont St Peter a few miles from where I lived, and traded the MGB in for a new car.

I saw the MGB advertised and purchased it without realising that the registration number was the same as the A40 when I owned it.

So some four years later and with three intervening owners, the number plate returned!

What are the odds on that happening? It has to be tens of millions to one! We still have the number plate, we could never let it go now. It has been transferred on every time my wife has changed her car."