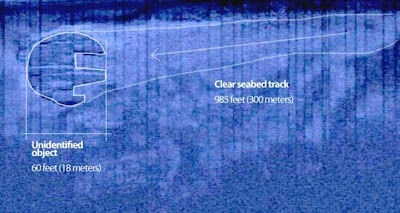 When an unusual item was seen deep in the Baltic Sea, the shape excited UFO watchers. Could this possibly be a UFO sunk into the depths of the waters?

Below is an up to date Press Release from the Ocean X Team investigating the object further. There is also a report on this on the Daily Mail website. Their article describes what has been seen as a "UFO-shaped object found at the bottom of the Baltic Sea... covered in soot, with 'little fireplaces' and lying at the end of a 1,000ft runway."

There is also a video on the Swedish website Expressen.se Here's the Press release:

THE TREASURE HUNTERS, OCEAN X TEAM, DISCOVERED SOMETHING UNIQUE WHEN THEY DOVE DOWN TO THE MYSTERIOUS CIRCLE-SHAPED OBJECT IN THE BALTIC SEA

Treasure hunters confirm they have found something abnormal in the seabed

The Ocean X Team dove down to the circle-shaped object in the Baltic Sea and met something they never experienced before. First they thought it was just stone or a rock cliff, but after further observations the object appeared more as a huge mushroom, rising 3-4 meters/10-13 feet from the seabed, with rounded sides and rugged edges. The object had an egg shaped hole leading into it from the top, as an opening. On top of the object they also found strange stone circle formations, almost looking like small fireplaces. The stones were covered in something resembling soot.

"During my 20-year diving career, including 6000 dives, I have never seen anything like this. Normally stones don’t burn. I can’t explain what we saw, and I went down there to answer questions, but I came up with even more questions ", says Stefan Hogeborn, one of the divers at Ocean X Team.

The path to the object itself can be described as a runway or a downhill path that is flattened at the seabed with the object at the end of it.

"First we thought this was only stone, but this is something else. And since no volcanic activity has ever been reported in the Baltic Sea the find becomes even stranger. As laymen we can only speculate how this is made by nature, but this is the strangest thing I have ever experienced as a professional diver", continues Peter Lindberg, one of the founder Ocean X Team.

Right now, scientists are examining samples from the circle-shaped object, and experts in sonar imaging are processing data from the ship to hopefully shed more light over the mysterious object.

Other UFO Posts:
Two New UFO Photos: Are They Linked To Rendlesham UFO Incident
The Bizarre UFO Mystery And a Man Found Dead
How President Eisenhower Met A UFO Alien