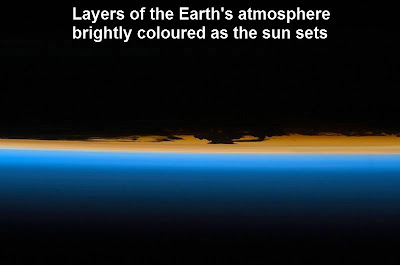 I have mentioned previously that when my best friend Colin died his wife gave me some of his books and papers on various spiritual subjects. One I looked at yesterday is about the human aura but goes on to talk about how this effects the Earth and other planets.

The following is a quote I found interesting when I opened the booklet at a random page. It was written by R.P.Beesley:

"The Earth itself, like other planets, wears a mantle of environment; this we know as atmosphere. But atmosphere is more than a state of gases, it is a living condition that can be affected by the thought forces released by its inhabitants.

Some planets have very high spiritual atmospheres and carry very advanced civilisations. Our own needs a lot of refining, for many of the thought waves released are anything but spiritual or refining.

We draw from our atmosphere just as we breathe air and drink water, so right living and right thinking is important for it feeds back. Thus the innocent can be affected; like rain it falls on the just and unjust, so the way we live, think and do our business creates a climate of living.

In the human aura this shows as personality; in world or planet aura it indicates man's state of affairs.

The spirit is the true self, this is our eternal body. That it will grow, expand in wisdom and knowledge, become strong, resilient, courageous and deep in understanding, is the purpose of its being, thus to become builders, teachers, skilled artisans of creation.

As the Kingdoms grow other worlds are still in the making, so these are the souls and spirits to help fashion and to dwell in these future realms - brave new worlds invested in the consciousness of God. We must be humble servants, partners and workers, serving the Universal Consciousness in all things."

So, with all that is going on in the world today, I wonder what the state of the Earth's 'atmosphere' is at the present time? Are we improving or polluting with our thoughts? Just as we create the state of our own auras we also seem to have a duty to release 'right' thoughts for the betterment of everyone on Earth. We all have a role to play.

Further 67 Not Out Posts:
The Fortress Of Light: 24 ways to prevent psychic attack
Key To Creating Our Desires And Conquering Pain With The Mind
A Secret Freemasons View Of Old Age And Death

Email ThisBlogThis!Share to TwitterShare to FacebookShare to Pinterest
Labels: Aura, Currents of Thought