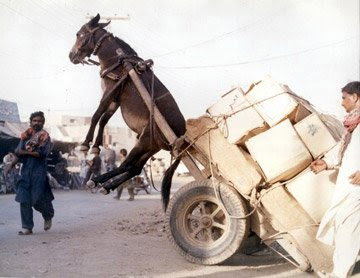 Readers will probably view the photo above differently. At one end of the scale will be laughter and at the other, sadness that animals are sometimes used to carry loads way beyond their strengths or capabilities.

I remember reading in an occult book many years ago about how we as individuals should never take on the loads belonging to others or should sacrifice ourselves in favour of someone else. Who, they argued, can say whose life is the most valued?

This by no means that we shouldn't help others, in fact this is probably our duty to offer assistance - but only if the load in manageable.

This follows even into the realms of business. When I first went into management my boss told me I was doing too much myself. He said he didn't care if he came in and I had my feet up on the desk (as if!) as long as the figures were good and all of the work was completed. He then told me a story:

Bob lived opposite Alan, their houses faced each other. One day Bob lent Alan £1000 on the understanding that it would be repaid on the following Saturday morning.

Alan knew he was unable to repay the debt so on the Friday night he couldn't sleep. He tossed and turned and was worried sick about what Bob would say and how he could ever repay him. He got into a terrible mental state until ...

He went to his bedroom window and called across the road to Bob.

Bob opened his window and Alan shouted across to him that he wouldn't be able to pay the £1000 in the morning as promised. He then went back to bed and slept soundly.

It was now Bob who couldn't sleep. He tossed and turned wondering how he could ever get his money back from Alan.

The load had been switched from Alan to Bob.

Sometimes it's necessary to put a little of the onus on others, as we should all play an equal part in the game of life.

Just a few rambling thoughts, apologies for the self indulgence!

Other Random Posts:
It Pays To Be Odd If You Own A House
The Odd Comparisons Between 1912 And 2012
UFO Seen By Sports Journalist Plus 8 Other UFO Sightings

Email ThisBlogThis!Share to TwitterShare to FacebookShare to Pinterest
Labels: Currents of Thought, Thought Of The Day