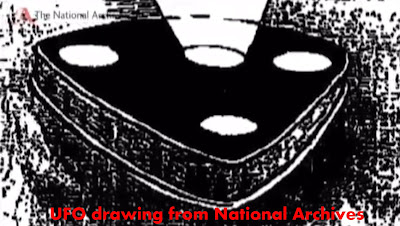 The UK government have released more UFO files from it's archives and these may be viewed for a limited period at The National Archives website.

The files contain a wide range of UFO related documents, drawings, letters and parliamentary questions ranging from 1965 up to 2008.

There's a mountain of stuff to go through if anyone has the time or the inclination. Such things as:

A spate of UFO and alien sightings in West Wales during 1977 led to tabloid headlines linking the region with the infamous Bermuda Triangle. The local MP, Nicholas Edwards, said he was "inundated" with reports from constituents and asked MoD to investigate. He received a letter from the proprietor a local hotel who claimed she saw a dome-shaped object land "like the moon falling down" behind the hotel. Two tall silver-suited "faceless humanoids" emerged and began "making measurements". She told her MP she was left in a state of shock. MoD asked the RAF police to make "discreet enquiries" in the area and sent an officer from RAF Brawdy to interview the woman.

A member of the public from Spalding, Lincolnshire who had reported a UFO encounter to police, later went on to receive a late night visit from three tall men dressed in black suits who "seemed to move silently", according to a friend who witnessed the visit whilst hiding in the downstairs toilet. The men apparently broke in through the back door, before entering the bedroom of the UFO witness and having a conversation, the content of which was not overheard. The "petrified" friend locked himself in the toilet until "men in black" left in a black Jaguar soon afterwards.

Personally I don't believe that the government would reveal anything significant, no matter what is professed. They would retain such material as classified.

If you have lots of time the files are there to be viewed. You never know, you might just discover something significant - or there again not.

Other UFO Posts:
The Mystery Of The Giant UFO Aliens Of Voronezh
UFO And Alien Sexual Encounters
The Alien Visitation And UFO Sighting