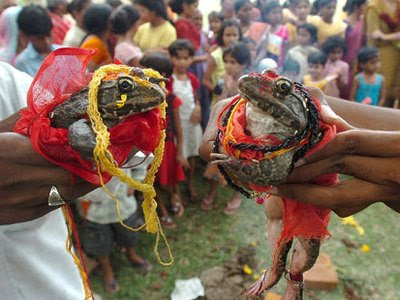 I think I may have cracked it! The reason, that is, why in England we have been having so much excessive rain.

The reason: too many frogs are getting married!

To stop our record rainfall, therefore, we must immediately place a ban on frogs taking their wedding vows.

You may think I've gone nuts but in central and western India they are having rituals aimed at appeasing Lord Indra, the mythological rain god. And to do this they are playing host to wedding feasts for frogs.

The English have got floods of rain - in India it's scarce - so it's got to be down to the frogs.

To quote from the India Gazette:

"In Chhatarpur, Madhya Pradesh, the residents performed a traditional Hindu wedding, but the bride and groom were frogs, and not human beings.

A group of women sat with the frogs during their wedding, singing songs and dancing while the amphibians were anointed and led through the ceremonies that aimed to appease Lord Indra, the rain god.

Pandit Munna Arjariya said that the ceremonies had been performed in accordance with the Hindu scriptures. He added, "According to Hindu rituals, the wedding started with an anointment of vermilion, followed by a sacred offering, then the solemnisation of the union and a 'Havan' (fire ritual) was performed. The ceremony ended with the departure of the bride."

In another part of India a priest, Pandit Shivprasad Chaurasiya, explained, "Even our religious scriptures mention that a wedding of frogs accelerates the onset of rains. Indeed, water is precipitated by a frog's croaking and our ancestors have said so."

That's good enough for me. I'm suggesting to Prime Minister Cameron that we have an immediate ban on frogs getting married. For once we have to forget political correctness and do what is best for Britain!


Other Strange Posts:
The Fly In The Urinal Manipulation
The Red Balloon Coincidence
The Mysterious Rude Man Of Cerne