Premonition Of The Death Of Admiral Nelson At Trafalgar

When at school I never saw the point of history, all of those dull dates and old battles won. Now I've changed my mind and realise that there is much to be learnt from what happened in the past.

Reading about Admiral Horatio Nelson recently also got me thinking that not very much is new nowadays. There might be new technology but man is still the same and can operate on many levels.

Premonition, for instance, has always been with us - though many doubt such a thing exists. Keeping to the theme of Nelson - whom Alfred, Lord Tennyson described as the greatest sailor since our world began - he believed and acted on his premonitions. 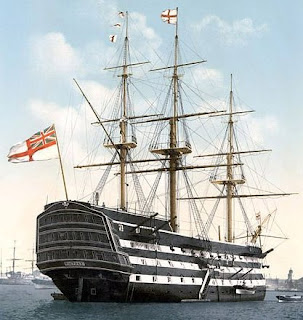 I suppose the most famous peek he had into his own future was to forecast his death prior to the Battle of Trafalgar. While on shore leave he left London's Admiralty and headed for his upholsterer, where a coffin was stored made from the main mast of L'Orient, a Flagship of the French.

He told the upholsterer to remove the coffin from storage and have it's history engraved upon it, saying he would require the coffin on his return from sea.

Admiral Nelson set sail on his beloved Flagship, Victory, to face the Franco-Spanish enemy. Some of the ships crew had heard him discussing a possible battle with his Captain Hardy. Nelson went over to them and said, "Tomorrow will be a fortunate day for you, young gentlemen, but I will not live to see it."

The following day, as they prepared for war, Nelson left his fighting sword in his cabin. He was going into battle without his sword, which was unknown. He spoke to Vice Admiral Henry Blackwood, shook his hand and said, "God bless you, Blackwood, I shall never speak to you again."

This was the Battle of Trafalgar in 1805 where Nelson was shot and killed. His premonition become a reality. 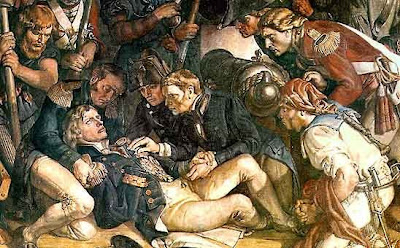 His death has become a legend in British history. It is often told of how, as Nelson lay dying, he said to his captain, "Kiss me, Hardy." The establishment at the time tried to alter this to 'Kismet, Hardy' to make it more acceptable. It is, however, recorded by the surgeon, William Beatty, on board Victory that Hardy did kiss Nelson on his cheek, twice, as he lay on his death bed.

These weren't Nelson's final words, as many believe. Beatty recorded them as, 'God and my country.' 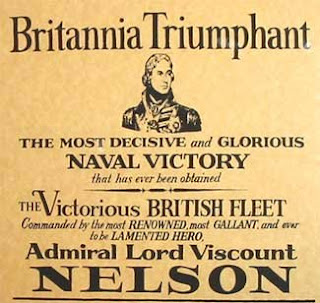 Nelson's death and the the Battle of Trafalgar victory made him a heroic figure to the British. Today Nelson's Column stands tall and proud in Trafalgar Square, London.

There are lots of examples of Nelson's reliance on his premonitions.  While a still a ship's captain he captured a fishing schooner owned by Nathaniel Carver as it was making its way homeward to Boston. By the rules of the time this became Nelson's 'prize'.

However, he sent for Carver and told him to pilot both ships into Boston Bay. This was carried out and to Carver's surprise Nelson handed him a certificate to prevent his capture by any other British ship.  He 'felt' this was the right thing to do - and was soon proven right.

Nelson and his crew fell ill with what could have been a fatal disease. He had no alternative, even though at war, but to head for Quebec to get treatment for his men.  Suddenly through the mist, a sail was seen approaching them and Nathaniel Carver's schooner came alongside.

In the thick of what was an awful war Carver risked his life to bring Nelson fresh fruit, vegetables and poultry.  These gifts saved the lives of his men. Karma in action perhaps?

Nowadays many of us fail to listen to our premonitions. They somehow don't seem to fit into a technological age - perhaps to the detriment of mankind.

Other History Posts:
History Helped Defeat Hitler
Is Afghanistan History Repeating Itself?
Historical Dunster And A Reminder Of Carefree Days