OBE: An Out Of Body First Experience 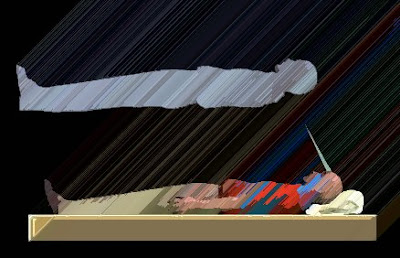 Carrying on from yesterday's theme here's an Out of Body Experience story from A Customer who wishes to remain otherwise anonymous. His experiences with OBEs started when he was 17.


"I must have willed my first out of body experience which started as a very normal dream. I stumbled and knocked my head in this dream which I suppose triggered something.

Suddenly there was a very loud whistling and crackling sound in my ears and a rush of consciousness and I stood up in my dream more awake than I had ever felt before, everything that had been present in my dream was still there, buildings, streets and gardens, none of which I recognised. What the hell was going on?

I remember the sheer disbelief and shock that this was actually happening to me, I was wide awake in a dream, conscious of all my faculties and able to make conscious decisions about where I would go and what I would do, although something attached to me from behind was definitely pulling me back as if I was wading through Ink.

I clearly remember looking down at the clothes I was wearing and then at my hands, I got really scared at that point because I thought I had died in my sleep. Suddenly without warning there was a huge tugging from behind and I was pulled backwards through some lavender bushes, I remember the smell and branches scratching in my face and the loud whistling and crackling sound in my ears again. I was pulled up in to the air and watched the streets and strange gardens pass by under me, I lost my vision and all went dark but I could still hear the whistle and then I felt a definite transition in consciousness from higher to lower, I think?

I opened my eyes and was back in my bed at home, my night light was still on, my heart was racing and my usually docile cat was going crazy, staring right at me, growling and hissing as if she had seen a ghost.

I think I would have been happy with just one Out of Body experience, but that night I opened a door I have never been able to shut and for many years afterwards they continued almost every night sometimes two or three times a night, sometimes beautiful, sometimes terrifying but always different. I have many times been turned and guided by invisible hands. I am not a liar!

But who honestly could I tell? I quickly realised that it was not something you can mention in passing conversation, even to ones own parents and at the risk of being branded a nutcase or a fraud. I decided to keep it to myself for many years. Yes!It was a lot for a young lad to carry.

They still happen to me now 16 years on, although they are rare and they don't bring the fear that they used to, I think I have just learnt to live with it now although I still don't really know what was happening to me."

Further Posts:
The Night Demon Sitting On Your Chest
The Winds And Energy Of Death
Astral Travel By Hypnotherapy