OBEs And Out Of Body Loving Experiences 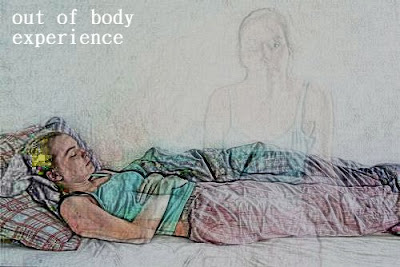 I've been reading a little about Robert Monroe and his out-of-body experiences. He wrote a book on the subject called Journeys Out Of The Body. At the same time I received another email from Kate, who I featured in the recent post The Ghost Who Wanted Sex With Kate. You'll see how this ties up later.

Monroe's experiences of OBEs began back in the 1950s when he felt as if he had been 'struck by a beam of warm light' which caused his body to vibrate. Over the following six weeks strange happenings occurred.

On one occasion he was lying on his bed with his arm and hand hanging over the side. He then had a sudden feeling that he could push his fingertips through the floor.

Then came his first proper out of body experience. He felt 'a surge that seemed to be in my head.' He opened his eyes and felt that he was floating close to the ceiling, looking down on his body.

Not expecting such a thing to happen he felt himself in shock and immediately plunged back down to his body and 'dived in.'

This awakened Monroe's interest and he started to experiment and became adapt at leaving his body and taking journeys.

In one of his first out of body trips he 'visited' a friend whom he knew would be home, as he was ill, but was surprised to see him leaving his house with his wife. His friend later confirmed that this was true. He had felt better so decided to go for a walk with his wife.

Now comes the bit that may perhaps link up with Kate's experience.

While out of his body Monroe made a visit to a woman friend and actually pinched her! She reacted as anyone else would do. When he later told her what he had done his friend showed him a bruise at the exact spot where he pinched her.

Okay, so what I'm getting around to is that perhaps Kate didn't feel a ghost touching her intimately - it was, instead, someone travelling out of his body.

If an OBE traveller can pinch and cause a bruise then, perhaps, Kate could also experience someone's hands on her body.

Astral travel, according to Monroe is not really meant for our world, that's why it isn't always easy to do or control. But there are other realms or worlds, which he calls locales.

Local II he explains: '... thought is the wellspring of existence ... As you think, so you are ... the interesting aspect of this thought world (or worlds) ... is that one does perceive what seems to be solid matter as well as artifacts common to the physical world.'

It's this Locale II where the astral body can roam freely and is where we move to following death - Heaven and Hell if you like. This locale can, seemingly, be visited by the astral body when we sleep.

Returning to Kate maybe she was asleep - though she says not - and she met this other 'man' on Locale II.

This may sound a little far fetched to some but I know of a woman who swears that she visits a spirit lover in what she calls the 'spirit world' and has now married him - in that spirit world. Her story was once featured in a UK magazine. This was many years ago and, unfortunately, I can't now trace this on Google anywhere.

Realms, levels or locales, though, seem quite feasible to me.

Further Reading:
The Reality That Probably Isn't Actually There
Ghostly Rye: The Most Haunted Town In England
The Tickling Ghosts

On Amazon: Journeys Out of the Body by Robert A Monroe

Email ThisBlogThis!Share to TwitterShare to FacebookShare to Pinterest
Labels: Ghosts, Ghosts and Dead People, Heaven, Life After Death, OBE, Out of Body Experiences