David Starkey is a historian often seen on UK television. He's not everyone's cup of tea but he does have definite opinions, which he sticks to, and certainly knows his subject.

He recently wrote, "Today our politicians are schooled in the social sciences, with their pseudo-scientific generalisations about human behaviour. They would do better to be guided by history, which deals with people as they are, not as we would like them to be. I fear that until we have politicians who are formed in the same way as Churchill, we will continue in our wilderness."

So why does he hold Winston Churchill in high regard? Because he believes it was Churchill's knowledge of history that helped him play his part in defeating Hitler in World War II.

While in opposition of the British government, in the mid 1930s, Churchill wrote a massive work of over one million words about one of his ancestors: John Churchill the Duke of Marlborough (26 May 1650 – 16 June 1722). The six volumes were called Marlborough His Life And Times. 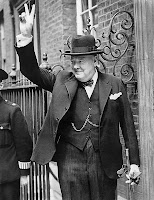 Starkey describes parallels between the John and Winston Churchill: "Studying his ancestor's struggle against Louis XIV turned out to be the best possible preparation for Winston's duel with Hitler. Like Hitler Louis XIV was territorially aggressive, constantly striving to extend the borders of France, through conquest. And also like Hitler, Louis waged a brutal internal war against a religious minority: not Jews, but French Protestants, the Huguenots."

Starkey feels that, as Hitler rose to power, Winston Churchill was "the only serious (British) politician of the front rank who had thought of war; who had contemplated what has to be done in war; who really understood it." And this was because of his knowledge and study of his ancestor, John Churchill.

There is a 'what if' between Churchill and Hitler.

In 1932 Hitler was becoming the main man in German politics. In the same year Churchill was visiting Munich and at his hotel was introduced to one of Hitler's financial backers Putzi Hanfstaengl a German-American art dealer.

Churchill wrote about this: "Putzi said that Herr Hitler came every day to the hotel at five o'clock, and would be glad to see me. I had no national prejudices at this time."

A meeting was arranged between Churchill and Hitler but Hitler failed to keep the appointment. It appears that Hitler didn't feel that anyone paid attention to what Churchill said and therefore didn't warrant his time. But 'what if' the two had met?

As I mentioned earlier there are parallels between John Churchill, the Duke of Marlborough, and Winston Churchill. To quote David Starkey again. Marlborough His Life And Times are books "about a man who led a coalition of Allies in a war to prevent the domination of Europe by an aggressive hegemonic power, written by another man who would take up the same role in another global conflict."

There are lessons in history which, unfortunately, we overlook, take Afghanistan at the present time. We've been there before and the outcome will be the same. History tends to repeat itself until we get it right.

Other History Posts:
Is Afghanistan History Repeating Itself?
A Nation Seduced By Symbols And Expectation
Hitler And His Divining Rod For Dark Forces