White Feathers As Messages From Her Baby Girl 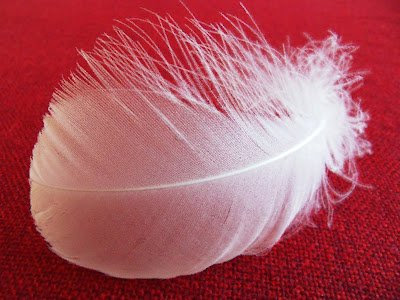 As regular readers know I have published several posts about white feathers and how for some, including myself, are seen as messages from those who have died. Here's a story from Kasey Logsdon who lost her baby girl, Khloe.


"In 2010 I gave birth to my angel baby Khloe Renee. She was perfect and the most beautiful baby I have ever seen, but a blood clot formed inside the umbilical cord causing her to pass away while I was 33 weeks pregnant.

I was completely broken and didn't know how I was going to go on with my life. While I was still in the hospital my dad was leaving, from holding her for the first and last time, and while entering the elevator he saw a white feather and picked it up and put it into his pocket

Later that night my mom called me at the hospital and said she had little white feathers all over her house and they were clearly not there before. I kinda believed her but thought she was mainly trying to make me realize Khloe is still with us

I didn't think much of it until the next day, when I was released to go home. My husband and I went to my mom and dad's because we were living there at the time. In Khloe's nursery there were around 10-15 feathers in random places in her room - and not normal feathers either. The tips are very soft, unlike pillow or bird feathers, and they are a very bright white.

I was amazed and so blessed my baby girl was home with me and I kissed every feather and put them all into one of the boxes from her room.

About a week later white feathers started showing up again. Like one time I was home alone, laid my phone on the table, went to the restroom and came back to pick up my phone. A feather was right on top of it.

The blanket Khloe was wrapped up in, when I held her, I had folded up into a zip lock bag because it smelled like her. I was crying and upset so I got it out and unfolded it and out fell yet another feather.

The first time I checked my FB after she passed a feather fell from mid air right onto my keyboard.

The list goes on and I still find them every once in a while but not as often. Every time I still kiss them and whisper, "I love you too Khloe."

Two months later, on what was my first Mother's Day, I found out I was pregnant. I now have a beautiful happy, healthy little girl who also brings me feathers she finds in her toy box."

Thank you Kasey for telling us your story.