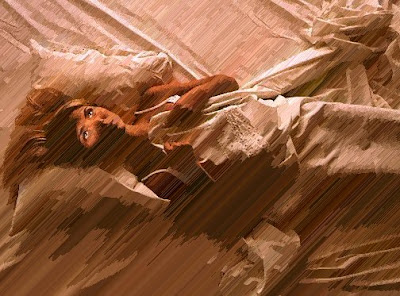 This is a continuation of Kate's story about her ghostly experiences and how she now thinks that her ghost may actually be an incubus. I'm not sure what to think of the story, so will let readers make their own judgement.


It's me again. I bet you thought you had heard the last of me. I wanted to tell you what has happened recently. You may publish this if you want.

My ghost has returned. I told an aunt about what had been happening and she says it sounds more like an incubus than a ghost and that she had a similar experience when she was my age.

Since I last wrote I have had this creepy feeling that someone is watching me when I am in my bedroom. It is like before. I get glimpses of something out of the corner of my eye, a kind of movement or a light.

I have an en suite bathroom and I feel that I am being watched if I walk out of there without dressing. I say it's creepy but I don't feel afraid any more if that makes any sense.

Since then things have moved on. I was in bed and as I came out of my sleep during the night it felt as if someone was on top of me. I'm sure I heard whatever it was breathing in my ear.

I opened my eyes and it had gone but I know it wasn't a dream, it was different.

A few nights later it happened again. I was lying on my tummy and I woke after a dream. There was what felt like a man on top of me. He was gyrating, if you understand what I mean, and again there was the sound of deep breathing in my ear. For a moment I couldn't move or open my eyes. After what was most likely only a minute or two I was able to speak and told him, "Go away." And straight away the weight lifted from me and was gone.

I drifted off to sleep again and it was that day that I told my aunt about what had happened. My parents wouldn't have believed me and I would also be embarrassed to tell them.

Two days ago there was another happening and I know this will sound as if I am a frustrated teenager, as someone who made a comment on your blog suggested. But this is what happened.

I was dreaming and the dream moved on to being sexual. I was with this young man and it felt as if we were about to make love. In the dream I was quite willing for this to happen. For some reason I then woke up but couldn't move.

I was laying on my back with my hands above my head and it felt as if I was being held in this position. There was a weight on top of my body and again there were gyrating movements from an obvious male. I could hear and feel his breathing in my left ear.

Though I couldn't move I'm embarrassed to say I was actually enjoying what was happening to me but then I suddenly got frightened and I told whatever it was to, "Go away." My arms were released and in an instant the ghost or incubus was gone.

I lay still, half wishing I hadn't stopped what had happened. I drifted off to sleep and the next thing I knew was my alarm clock ringing.

I told my aunt, my parents wouldn't understand, and she said how similar it was to her experience only she had full sex with the incubus and this continued regularly for several months.

That's what has happened and I know most people won't believe what I have said. They will most likely say it's a dream or I'm a fantasist. But it wasn't and I'm not.

Kate's Story: Parts 1 and 2:
Part 1: The Ghost Sitting On Kate's Bed
Part 2: The Ghost Who Wanted Sex With Kate