Dreams As Calling Cards From Her Dead Father 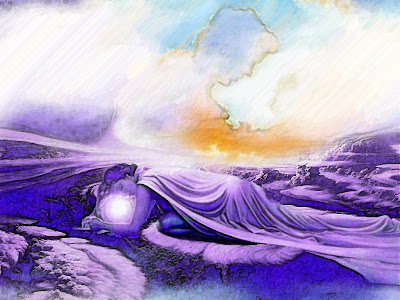 In the past I have had dreams that have come true and have twice dreamt the winners of horse races (even though I know nothing about the sport) so the following is probably a bit mundane in comparison.

Last night I had a dream about how someone was searching for my wife. It was an older man with grey hair and a small beard. It doesn't make too much sense but I was also helping him look for Karin.

In the morning I told Karin and she said that my dream made her remember her dream, which was about her father.

Her father was looking for her. I must explain here that Karin's dad was killed when she was only four years old, so her memories of him and how he looked are very limited.

In Karin's dream someone purporting to be her father eventually found our house and called at our front door. She didn't recognise the grey haired man so she asked him questions to prove his identity, such as: did he know her birthday, her mother's name and so on.

He answered correctly but then, as sometimes happens with dreams, everything faded and she woke up.

That's all there is to it, but it made me wonder if there was perhaps more to it than just two dreams on a similar theme.

I have recently completed making an album of my son's early days, as a birthday present for him - photos and so on for about the first twelve years of his life. As he now has a son of his own I knew he would like to compare his life to that of his two year old.

At the back of the album I included photos of his recent ancestry going back three generations. This included a couple of photos of Karin's father - i.e. my son's grandfather. I wondered if this was what had stirred those dreams? Were they simply because we had dug out the old photos - or was there something deeper? Maybe a link had been strengthened between my wife and her father and he was visiting to see how her life was progressing recently.

Okay, a little fanciful for many readers. But sometimes it's good to examine other options, besides those many would consider the obvious. The way I looked at it was: why wouldn't a father - even though no longer of this world - want to see how his daughter and her family were progressing? The dream was his 'calling card'.

Other Dream Stories And Posts:
The Answer To Sexier, More Colourful Dreams
The Dead In Dreams Are Very Real
Ancient Egyptians And Their World Of Dreams

Email ThisBlogThis!Share to TwitterShare to FacebookShare to Pinterest
Labels: Coincidences In Dreams, Dreams, Messages from the dead