King Farouk And The Ditty Sung By The Airmen 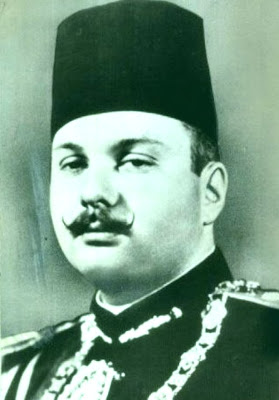 An amusing story from when Egypt was ruled by King Farouk (February 11, 1920 – March 18, 1965) and at a time when it was occupied by large numbers of British troops.

Christmas was approaching and two British airmen were hitch-hiking from Port Said to a large army camp at Fanara, near Bitter Lakes, for the festive celebrations.

The two men had been consuming quite a lot of alcohol when a large limousine pulled over and offered them a lift.  By coincidence it was heading to the same camp with some important looking Egyptians spread out comfortably on the back seat.

Full of high spirits, as the journey got under way, the two airmen started singing popular songs and then moved on to a risque ditty that British troops seemingly often sang. This went: 'King Farouk, King Farouk, hang your ******** on a hook.'

The limousine eventually reached the camp at meal time and the two airmen sat at a table waiting for service.

The waiter arrived at last and was carrying a bottle of champagne and said it was, "With compliments of the King,"

He pointed to an Egyptian sitting three tables away from them who gave a friendly wave when he saw them looking at him. It was only then that the penny dropped.

The airmen realised he was one of the occupants of the back seat of the limousine - and that it was none other than ...

... His Majesty Farouk I, by the grace of God, King of Egypt and Sudan, Sovereign of Nubia, of Kordofan, and of Darfur.

"Quite a coincidence," they told their pals as they remembered the ditty they had been singing over and over on their journey to the camp.