The Pixies Saved Us From The Evil Serpent 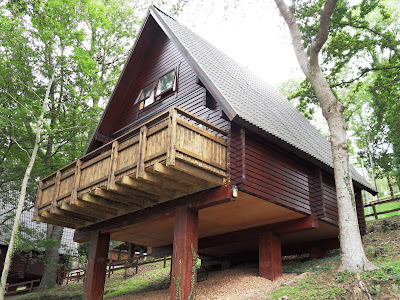 We have been away visiting friends in Dorset and then stayed in a lodge on the edge of Dartmoor (photo above), which is a National Park in England.

As usual most of our time was spent walking and, amazingly, the sun decided to shine on us after an unusually very wet summer.

Today's post tells of how we were saved from a serpent - by pixies! Well, perhaps, maybe, who knows. 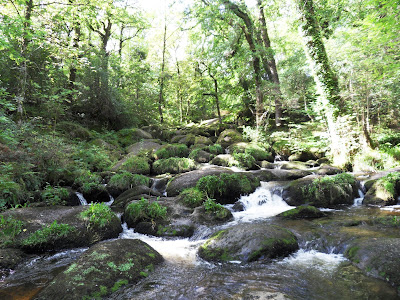 We were walking alongside the rushing river in the ancient valley of Becky Falls on Dartmoor. It was thought that in olden times this was a route from the moor to the town of Bovey Tracey. There was, however, a problem with walking along this pathway. A serpent lived by the brook and he would occasionally pick out a traveller to eat. 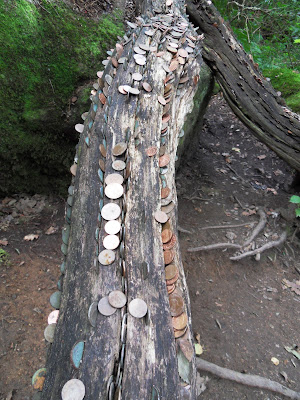 Fortunately helpful pixies also live in the valley and, if you leave them coins, they will affix to the traveller an invisibility charm so that the serpent cannot see them.

Today there is a tree where walkers and the like should leave their coins. Travellers must never, never take any of the coins for themselves. Otherwise they will incur the wrath of the pixies - and, believe me, you don't want to mess with the pixies.

Needless to say Karin and I left a couple of coins - and it was a good thing we did for the pixies looked on us kindly.

We were walking up some rough rock steps, Karin in front, when somehow she lost her footing and fell backwards. I caught her but had an instant vision of us both falling. Somehow I held on to her and remained upright despite stepping backwards down one of the steps.

It could have been a very nasty fall, especially if I had been in front, as Karin would then have had no one to catch her. The possibilities are frightening.

Fortunately the pixies of Becky Falls offered us protection! The serpent didn't have his way. We were a bit shocked but otherwise unhurt.

Other England Travel Posts:
The Mystery Of The Three Hurlers Stone Circles
The Holy Well Of St Sampson At Golant In Cornwall
The Clapper Bridge Where The Devil Sunbathes