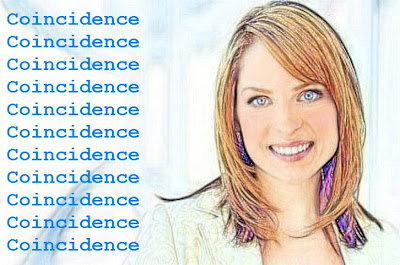 A couple of a years back I published a Squidoo Lens 10 Strange Coincidence Examples. It listed some of the well known classic coincidences plus some I have had myself. Here's a couple more coincidence stories that readers of the lens told me about.

First from Victoria of WebaliciousGuides

"I had a precognitive dream about five years ago after having a job interview for an internal job promotion. I dreamt that I was in the manager's office and he told me that I had been offered the job, although it was slightly different from the one advertised. I then dreamt that I was on the beach and all these green and pink slips of paper were floating around me.

When I got to work the next morning (the day I was due to be told whether I'd got the new job) I found that there were several green and pink slips of paper scattered on the ground outside the office - they were blank on both sides, and they were there for no apparent reason. I had never seen anything like that before, in all my months of working there. I thought it was spooky I had seen them in my dream the previous night. But in some way it reassured me - if that part of my dream was true - then maybe the dream about me getting the job would be true too.

And so it was - even though I wasn't offered the job at the rank I had applied for, I was offered one in the same role but at a different rank. It was really spooky, but I was just glad that I'd got the job! I had several other weird experiences at that time in my life."

And the second from jmurphy

"I had a very strange coincidence in my 20's. I went backpacking around Europe with a friend in 1973. While staying at a hostel in Marseille, we met some lads from Yeovil in Somerset. I took a picture of one of them.

Some years later my brother-in-law's sister married the same man who I had met in France and I had the pix to prove it. Neither I or my friend had any connections with Yeovil at the time, and my sister had not yet married. Spooky or what!"