The 7/7 Coincidence Which Saved Lives 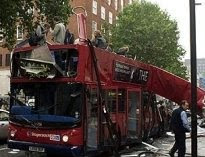 7/7, like 9/11, was a series of coordinated terrorist attacks. These happened five years ago in London when four suicide bombers killed 52 people and injured nearly 800 more.

One of the targets was a number 30 bus which was wrecked in London's Tavistock Square: 13 passengers were killed.

As in such incidents coincidences occurred which were both good and bad.

But, despite this, there were also two fortunate coincidences. The bus had been forced to take a detour from it's usual route and - because of this - the explosion happened right outside of the headquarters of the British Medical Association (BMA).

Attending a meeting at the the BMA HQ was a Dr.Peter Holden.

By coincidence, Dr.Holden just happened to be one of the UK's few major incident commanders. He said, following the explosion, "I thought 'I really am in it now', then I thought 'you've been trained for this - come on.'"

The right man was in the right position to handle the awful situation but there was another coincidence as well. There were also dozens of other doctors attending a medical conference so on hand were general practitioners, anaesthetists, some consultant surgeons and so on.

Doctor Du Feu explains, "Peter Holden turned up and just assumed responsibility for everything. He just started telling people what to do and people then knew who to ask and suddenly things started clicking into place. The scene was transformed from one of utter chaos into something resembling sense."

Dr. Holden added, "I still can't explain the series of coincidences that puts a bus on diversion where it shouldn't be, to blow up outside a building full of doctors."

So we here we have examples of the two sides to coincidences.

Passengers who wouldn't normally have been on the bus were injured but on the plus side the bus had to take a detour and the bomb went off where qualified doctors were on hand to save lives.