Major Illuminati Figure Owns One Sixth Of The Earth's Surface 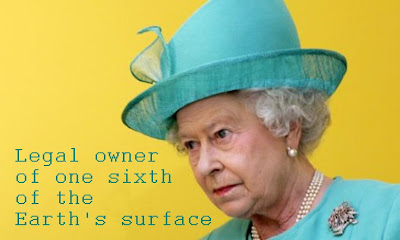 I was idly looking at a David Icke video about The Lizard Apocalypse and remembered a quote he once made about UK's Queen Elizabeth II being a major figure in the Illuminati.

I published a post of David Icke's quotes where he talks of the "the members of the Elite", such as Queen Elizabeth.

In one quote he goes on to say: "Their game-plan is known as the Great Work of Ages or the New World Order, and it presently seeks to introduce a world government to which all nations would be colonies; a world central bank and currency; a world army; and a micro-chipped population connected to a global computer. What is happening today is the culmination of the manipulation which has been unfolding for thousands of years."

I've always taken Icke's theories with that proverbial pinch of salt but today I read something that made me think. It's a short sentence from a book called QI Facts To Blow Your Socks Off:

"The Queen is the legal owner of one-sixth of the Earth's surface."

That's it. Personally I find this mind boggling.

I realise that over hundreds, if not thousands, of years Britain has seized many lands. In fact another book, All The Countries We've Ever Invaded, has researched that the British have invaded 90% of the world's nations. But the fact remains that it's Queen Elizabeth who is the main owner of much of the Earth not Britain.

Surely there can't be an element of truth in some of the things David Icke claims, can there? I wonder who else owns large chunks of the Earth's surface.

Other 67 Not Out Posts:
Elvis Presley And Madonna's Satanic Illuminati Links
Backward Illuminati Leads To USA National Security
The Quotes Of David Icke