Is This Why Prayers Are Never Answered 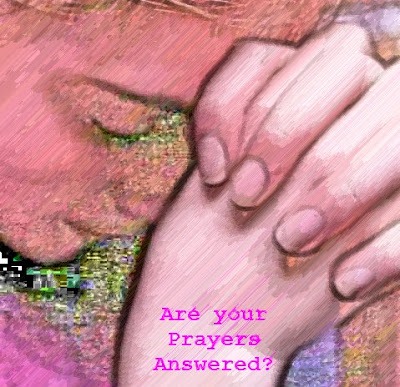 Here's something I don't normally do - which is to publish something on this blog that I completely disagree with. But today I thought I would!

The word 'athiest' in the title of his book immediately indicates that Mr Stefanelli would have little truck with many of the posts on 67 Not Out!

So blood pressure tablets at the ready here goes.


"The claim that God answers prayer is contrary to reality. Outside of the obvious, glaring reality that there is no God, coincidence plays a major role in the believer's lack of understanding about how the world works. Let’s take the scenario of someone locking themselves out of their apartment. They utter a prayer for help and a few minutes later the Superintendent shows up. Normally, this would be viewed as a coincidence. But according to the praying Christian, it was the hand of God that made the Super show up 'just at that moment' to unlock their door.

Consider, though, that in third-world countries there are faithful believers who are praying to God because they're starving to death or are succumbing to diseases that can be cured with modern medicine that isn't available to them for a variety of reasons, usually associated with money. Speaking of money, there are hundreds of thousands of people who have lost their jobs and are praying for God to give them another one, and to provide for their sustenance and health while they are unemployed.

It would seem that God is behaving like quite the jerk by ignoring all those sick, starving children and allowing entire families to be put out on the street, but chooses to send an apartment manager to unlock the door of an inconvenienced resident.

Depending on which variety of Christianity is in question, the reasons for a failure of God to grant a praying person's wishes will vary from accusations of improper praying, that someone involved had a doubt, that someone involved was not a 'True Christian', that it’s all Adam and Eve's fault or that the real culprit is that old Serpent, the Devil.

Almost every Christian will tell you, though, that we 'mere mortals' should never question the 'higher ways' of their God. What they will not tell you is that it takes twisted logic to explain how their God can answer the prayers of the person locked out of their house, but ignore the prayers of those who are victims of the death, destruction, starvation and deprivation that we see in our world every day.

What about when God grants the wishes of the praying person? Well, coincidences, even remarkable ones, are not unusual. They happen all the time. The dictionary defines the word coincidence as a sequence of events that, although accidental, seems to have been planned or arranged. 'Answered prayers' that do not involve the actions of other human beings are always coincidences, nothing more.

When a group of people prays about fixing up an old woman's dilapidated house, and then people show up with hammers, it's not an act of their God. It’s just a group of well-meaning people who made a choice to help out someone in need. Nothing wrong with that, except for the whole 'God led me to do it' part. Chances are pretty good that if the group were ardent atheists, they’d have done it anyhow.

As Steven Weinberg has so eloquently stated:
'With or without religion, good people can behave well and bad people can do evil; but for good people to do evil — that takes religion.'

Statistical analysis easily unmasks the illusion of prayer. If you pick out ten trivial things in your life to pray about on Monday, some of them will get answered and some would not. On Tuesday, if you don’t pray at all, you would see pretty much the same ratio of answered prayers. This is because the act of praying does not change the outcome. A Christian can go for a month without uttering one, single prayer and they will find that nothing will change because prayer is an irrational belief that an object, action, or circumstance not logically related to a course of events influences an outcome.

Simply put, when a Christian says, 'God answered my prayers', what it really means is that either a coincidence happened or some well-meaning believers got wind of her petitions. If you compare reality with what the Bible says about the efficacy of prayer, it becomes obvious that Christians are worshipping a cosmic consummate liar. There is no God in heaven looking down onto earth and answering prayers. Both common sense and statistics plainly reveal this. The miraculous intervention of the divine does not exist. You might as well be talking to your favourite stuffed animal. The choice is yours. Perhaps you should flip a coin."

There we go! I think it's sometimes good to look at opposing views. At the very least they make us think and question, and then go on to establish our very own set of beliefs,

Other 67 Not Out Posts:
The Secret Of The 12 Days Of Christmas
How A Prayer Was Answered
The Suffering Created By Eve And Pandora

Email ThisBlogThis!Share to TwitterShare to FacebookShare to Pinterest
Labels: Coincidence and Synchronicity, Prayer