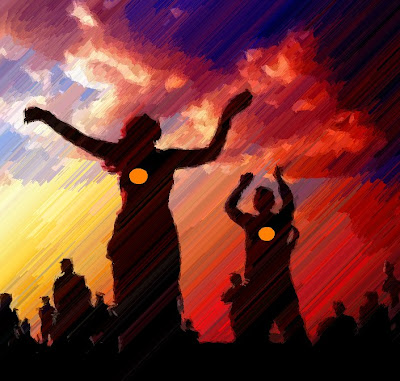 Today it's another coincidence story from Joe in London and was sent to me via JC who often sends me emails about synchronicity.

At the time I was a very withdrawn kind of person who was too anxiety-filled to engage with people I didn't know. My aim was just to spend the weekend wandering the festival on my own and occasionally being around the folks I went with - they were much older than me and not that interested in the music. I wanted to avoid communication with anyone else.

Anyway, this girl who was camping nearby, came over to our tents when I was on my own. She was the tiniest bit tipsy and started talking. She was lovely and enjoyable company and because I felt this straight away I somehow felt okay talking to her.

To keep the story short, it turned out we both had a mother going through cancer and I also found out she had a brother in New Zealand at the time - and so did I. So I started to think, 'Oh, this is a bit weird. Of the 30,000 people at the festival, the one person I end up talking to has these such things in common with me.'

And it got even weirder and more random. I mentioned some place we stopped off at on the drive to the festival. I don't travel a lot. My county and London are the only places I've really been in England. The festival was about three hours north from where I lived and two hours south from where she lived.

I mentioned this one lovely pub/inn we stopped off at on the way to the festival for a drink and some lunch. She just looked in shock and kinda half-screamed, in disbelief, "Oh My God! I know that place!"

It turned out that this was the inn she and her family go almost every year for a short holiday. It was pretty mind-blowing, really, to find that out, along with the other connections we had. And I mean the exact same pub/inn, not just the town.

So the only person I had spoken to, out of 30,000 people, whom I previously didn't know, turned out to have a mother with cancer, the same as me; a brother in New Zealand the same as me, and she knew exactly the one tiny pub/inn I had stopped off on the way to the festival - the one place in nearly twenty years I had been to outside of my home county.

It's still very weird, to me, but we have remained friends since."