You'll Remember Me Coincidence In Fields Of Gold 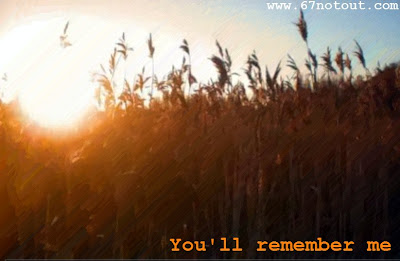 A touching coincidence story today from a 67 Not Out subscriber, Glenda. Also a reminder that those who have passed on are still with us.


Two years ago my brother, Gordon, died of cancer. He knew he was going to die so helped to plan his funeral. One of his requests was that as the funeral entered the crematorium the song Fields Of Gold by Eva Cassidy would be played. This was carried out, as he wished, and the time was 2.30 p.m.

On the first anniversary of his funeral my husband and I had to travel across to the west of England from where we live in Harwich on the east coast.

We travelled by car and in the afternoon I wanted a rest stop so we pulled into a service station. While my husband ordered coffees at the self service counter I went to the ladies.

As I returned to my husband, he was sitting at a table with our coffees and some teacakes. Just as I sat down they started to play Eva Cassidy's Fields of Gold. This quite shook me as I was aware that it was exactly a year from Gordon's funeral. What shocked me even more was that when I looked at my watch it was exactly 2.30 p.m.

My husband says it was simply a coincidence but I like to think it was more than this, and was a message from my brother. As the song goes, "You'll remember me when the west wind moves among the fields of barley."

Other Coincidence Stories:
Coincidence or Synchronicity - Example 3
Helicopter Landed In Her Garden Coincidence
The Incredible Coincidence Of The Thai Teachers