Her Boyfriend's Ghost Interferes With Her Love Life 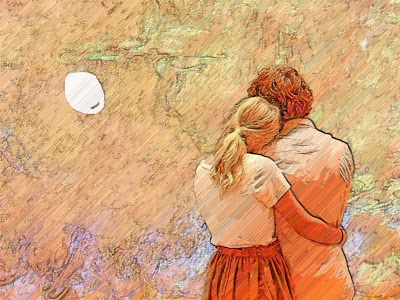 Sharon Grant, now 44 from Blackburn England, met and fell in love with Sean Eddleston when they were in their mid 20s.

Sharon told the Sun newspaper that Sean always said to her, "Sharon, we’ll be together for life, no one will ever come between us'." She took comfort from this and promised him she would never date anyone else if he ever died.

Of course, no one in good health thinks they will ever be parted but sadly Sean died of bronchial pneumonia when he was only 37. Sharon's world came tumbling down.

After a while Sharon felt that Sean's ghost or spirit was still with her. She explains:

"Strange things were happening. When Sean was alive, he moved the pictures in our home and made them crooked - it was a joke because he knew that it drove me mad.

A few months after he died I suddenly noticed that all the pictures would sometimes be wonky.

I knew it was Sean telling me he was still there and, rather than being freaked out, I drew comfort from the fact he was still around. Straightening the photos, I would shout, 'Sean, will you cut it out!'

Occasionally I heard footsteps on the stairs. I knew that it was Sean and I just left him to it. There was no need to be scared."

She enjoyed having him around until, that is, when she started dating again. Sharon tells of her first new relationship:

"I made a meal and we opened a bottle of wine. It was quite romantic.

It was a sad moment, as bringing a man home felt as though I was severing some link with Sean and moving on.

But after eating we settled on the sofa and, as I went to kiss him, there was a crash in the kitchen and I heard footsteps run upstairs.

I went into the kitchen and the plates we had eaten off were on the floor smashed.

I could still hear footsteps upstairs and went up. I knew it was Sean. I went into my bedroom and snapped, 'Don’t spoil this for me, Sean!'

The next time my boyfriend came round I was in the kitchen when he ran in and said, 'Something has ruffled my hair and pulled it!'

After that he refused to come round at night.

Another day he was visiting and I heard him knock on the door. I tried to get up from my bed but couldn’t move.

It felt like something was pinning me down and I had to say, 'Get off me, Sean! Now!'

After a struggle I was finally able to get up and answer the door.

We dated for nearly a year, but for the last six months he refused to come to my house at all."

The relationship ended after Sharon tried to explain about Sean's ghost - but there's probably only so much interference a suitor can take.

Next came a brief relationship with warehouse worker Dave Becket.

Sharon said: "We’d been on a couple of dates when he came to my house.

I was in the kitchen and the telly in the front room was off. But Dave suddenly went ashen and said he’d seen a reflection of himself in the blank TV screen - with someone sitting next to him.

I tried to remain blasé and said it was Sean and he was harmless. But Dave downed his drink and told me he had to go.

Yet again my dead boyfriend had prevented me from seeing someone else."

"I dated a man late last year and we went to my place for a nightcap.

We’d been there a couple of hours having a chat in the front room when I went into the kitchen to get us another drink.

Suddenly I heard him run out of the front door and down the road. I shouted after him but he looked terrified and kept running.

I don’t know what Sean did to this poor bloke, but he scared the living daylights out of him.

I’ve still got his jacket - he hasn’t been back for it and because I’d only just met him I didn’t have a phone number for him.

So Sharon is still on her own, but with the ghost of Sean, of course:

"Some nights I’ll sit down on my own in the front room and chat to him. I know he’s there, I can feel his presence. I was never interested in ghosts and ghouls before Sean died and had no opinion on whether they existed. Now I know they do.

I tell Sean I need that physical relationship with another man but it doesn’t mean I don’t still love him. I can be there for hours just chatting. I only hope Sean is listening.

But he needs to let me get on with my life."

The lesson is probably that we should be careful about what we promise - as it's not just for this life!

Other Ghostly Posts:
The Ghost Who Chased A Thief
Kate Says She Has Sex Regularly With A Ghost
Daisy The Gentle Ghost Who Loves Dogs